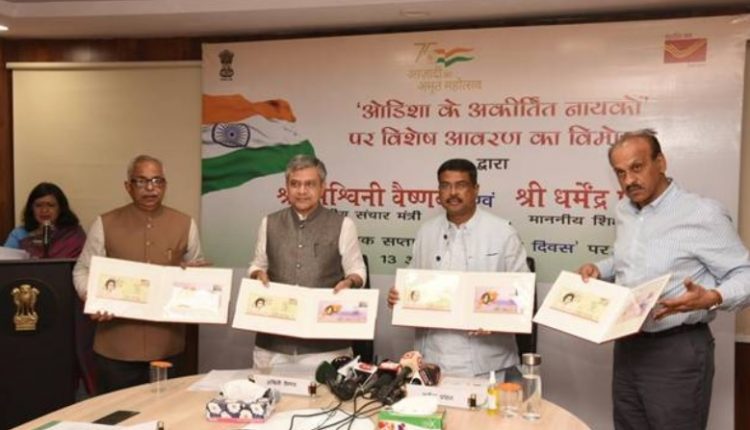 New Delhi: As part of the Azadi Ka Amrut Mahotsav and Philately Day celebration on Wednesday,  Union Minister of Education, Skill Development & Entrepreneurship Dharmendra Pradhan and Union Minister of Communications, Railways and IT Ashwini Vaishnaw released Special Covers on six unsung heroes of Odisha, who made great contributions to the country’s freedom struggle.

The unsung heroes are Buxi Jagabandhu, Sahid Baji Rout, Sahid Jai Rajguru, Sahid Chakhi Khuntia, Sahid Chakra Bisoi and Parbati Giri. During the function organised on the occasion at Dak Bhawan in New Delhi, Pradhan and Vaishnaw interacted with the family members of the unsung heroes via video link from Odisha.

Pradhan spoke on the struggle of these great men and women and advised the present generation to follow the path shown by these eminent personalities. Vaishnaw recollected that the great contributions made by the six heroes are etched in the minds of the Odia people and how they were a part of the local folk-lore.

The family members of the freedom fighters were presented albums of the Special Covers by the Department of Posts officials at local post offices in their respective home towns in Odisha.

Department of Posts  is celebrating the National Postal Week from October 11 to 17. Each day is celebrated on specific themes like financial inclusion, philately, mails and  parcels through mass campaigns involving citizens across the country.