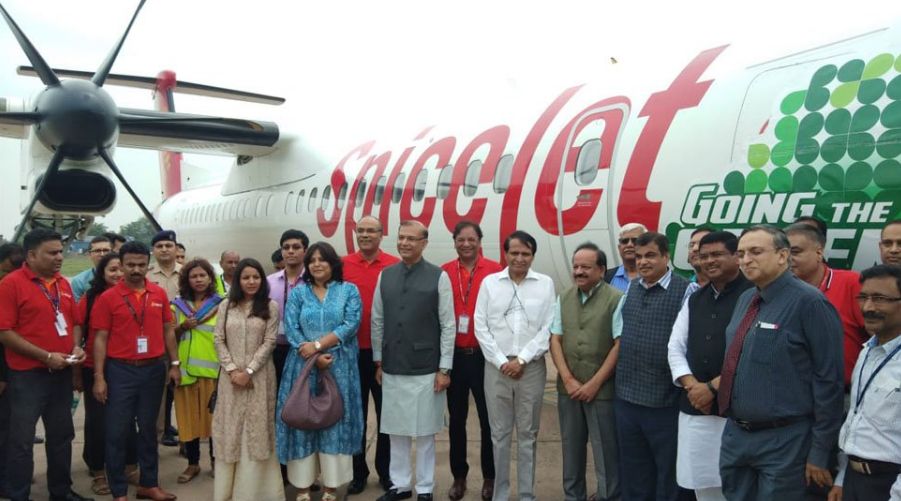 New Delhi: SpiceJet successfully tested a flight on Monday that was fuelled by a mixture of aviation fuel and biofuel.

The flight flew from Dehradun to Delhi’s IGI Terminal 2, where it was received by Union Ministers Dharmendra Pradhan, Nitin Gadkari and Suresh Prabhu.

The 25% biofuel was blended in the mixture containing 75% normal aviation fuel.

According to a report published in NDTV, the biofuel was developed by the Indian Institute of Petroleum at Dehrudun. It is made from oil extracted from Jatropha plant seeds which have been cultivated by 500 farmer families in Chhattisgarh. It is expected to be more efficient and more environment-friendly than traditional fuel.

“On August 10, PM Modi announced the new biofuel policy and today we have successfully implemented it in the aviation sector. It’s a big achievement in aviation and clean energy sector. GST has been decreased on biodiesel and ethanol,” said Union Petroleum and Natural Gases Minister Dharmendra Pradhan.

“It has the potential to reduce our dependence on traditional aviation fuel by up to 50 per cent on every flight and bring down fares,” said SpiceJet Chairman and Managing Director Ajay Singh.