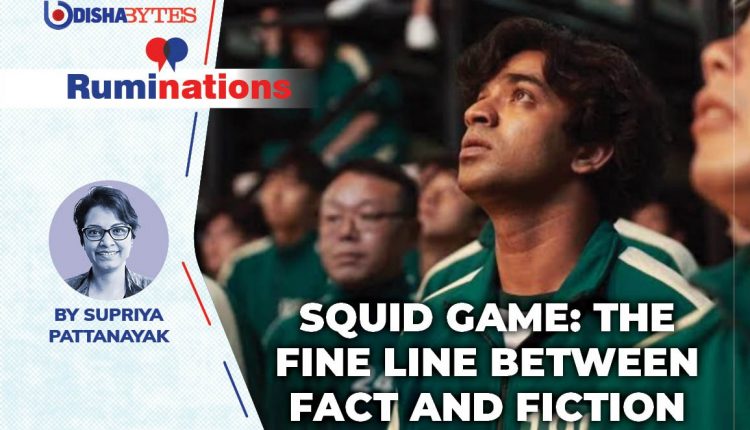 When we think of financially needy and desperate people, images of the poor and hungry, desperate for food, come to mind rather than of well educated and well-dressed individuals. Yet financial hardship can befall anyone at any time, mostly to those who have made a wrong decision probably combined with some bad luck. It can affect a cross-section of people in a capitalistic society who are then desperate to do anything to dig themselves out of the situation. The next step at this point is debatable. What do these desperate people do to get their hands on some money? Well, some may blame God and pray for salvation, others play the lottery or commit crimes while some may even lose the battle with hope and end their suffering.

Imagine if these people were able to play a few kids games and win the cash that would then solve all problems? That, as most of you may know, is the basic premise of the top-grossing and most popular ever Netflix series, Squid Game. Released on 17th September 2021, in Korean, with apparently very bad English subtitles (as per the Korean media), it is a gory dystopian drama where contestants compete in a series of children’s games in the hopes of winning money and paying off their huge debt. The options are pretty stark, you win or you die.

Much has been written about it, with the news and radio channels being full of reviews from brilliant and violent to incredulousness at the schematics of the plot for being untenable in real life. Interestingly, this South Korean drama was doing the rounds for around 10 years and was rejected for being too unbelievable and violent to resonate with the general public before Netflix decided to produce it. How wrong were the detractors as it has now topped 111 Million viewers worldwide and developed almost a cult following?

However, what intrigued me most was the very nature of that criticism and how it has been proved wrong. Fantastic it is not. Why do I say that you may ask? Well, let me explain.

Apart from the huge popularity of this series, it has now got a real-life spin-off being organised in Abu Dhabi, of course minus the violence. Then there is the case of young kids, who, having caught on to the details on tik-tok and the general media, are trying to play it on school playgrounds, so much so that the police and school authorities have issued a warning to parents about it. It is worth noting that the recommended age rating is 15.

Why has the show caught on so much? Is it because of the stark social divides it showcases between the haves and have nots in a capitalistic society? Maybe! It probably resonates with large segments of the populace as they identify with the happening in the series, however unreal it may appear to us.

Is it because it depicts an underdog winning without sacrificing his or her morals? It’s a strong contributing factor, after all, we always love to root for the underdog and want to uphold the moral values, at least in reel life.

Then there is the case of high octane drama along with the essential stereotypical characters, the quintessential ingredient for success. The husband playing against a wife, the bully, the opportunist, the kind-hearted Samaritan and so on, all thrown into the mix helped propel it into the hearts and minds of people across the globe.

I feel the fact that it happens in a foreign land spoken in a foreign language adds to the allure, the idea of probability, as we do not really know the society or culture to be able to identify with it personally but instead relate to it at a conceptual level. This also explains the fact that it is not as popular in its home country, having been criticised for false portrayals.

With all this hoopla, we would be forgiven to think that this is all fiction and harmless appropriation, of something that has caught on to the public’s fancy. However, a case of 4000 calls proves that this may not be the case. What 4000 calls, you ask?

There was a random phone number used in the series, which the contestants had to call to join the game. Unfortunately, it was not really random and belonged to a lady in South Korea, who had not watched the show. Within a matter of days, she received over 4000 calls from people all over the world, some asking her, in some cases very desperately, if they could play in the games. Afterwards, when she understood the context from a friend she contacted Netflix, who have now rectified the mistake.

However, the point to ponder is that there are 4000 people who want to play, knowing that they will lose their life if they lose in the game. It begs the question why? Maybe they wanted to create mischief, maybe they were curious or maybe they just could not differentiate between fact and fiction. But what if they were so desperate, as depicted in the show, that they were willing to die to make money rather than live in their present circumstance.

If even a few of those thousands of calls fall in this category, it should be a wake-up call that such desperation is real and this fiction is not far from facts. Squid Game is not just a series, it is an exaggerated reflection of the current social divides and the people trapped in it. As in the game, not everyone is innocent but a lot of them are. The million-dollar question is not how much the show has earned but rather what have we learnt from its success and are we doing something about it?