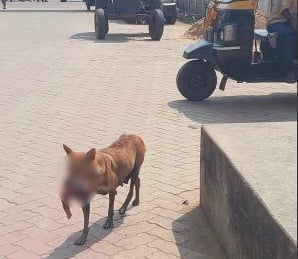 Balangir: A stray dog was seen eating and then running away with the corpse of a newborn on the premises of Santha Bhima Bhoi Medical College and Hospital in Odisha’s Balangir.

According to sources, some people standing near the hospital watched the gory episode unfold on Thursday.

Under what circumstance and from where the dog brought the corpse is yet not known.  It is being suspected that the miscreant might have thrown away the dead infant late on Wednesday.

3 Tourists Swept Away In Puri Sea; 2 Rescued, One Still Missing