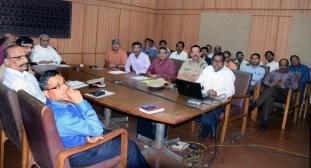 Bhubaneswar: Chief Minister Naveen Patnaik on Monday reviewed the flood situation with collectors of Nabarangpur, Rayagada, Koraput and Cuttack districts through video conferencing. He directed them to assess the damage and submit report within seven days.
The Chief Minister also asked the state machinery to remain alert to the impending crisis and work in a coordinated manner to tackle the flood situation.
He asked the departments concerned to work on a war footing to restore road connectivity in areas, where flood water was receding, and electricity. Besides supply of safe drinking water in rural and urban locales, the health department has been directed to take steps to prevent spread of water-borne disease during this period.
“Schools and anganwadi centres, which were damaged in the flash floods, should immediately be repaired,” Naveen said.
BMC Commissioner Krishan Kumar, who was present in the meeting, apprised the Chief Minister of the waterlogging situation in the state capital and steps taken drain the excess water.
Revenue minister Maheshwar Mohanty, Special Relief Commissioner (SRC) Bishnupada Sethy and senior officials of different departments were present.
According to a press release issued by the SRC, more than 28, 000 persons in 50 villages under Rayagada block and 20 villages under Kalyansinghpur block have been affected by floods. Four persons were injured in a wall collapse in Rayagada district and undergoing treatment at Padmapur community health centre. A total of 4, 000 people have already been evacuated and shifted to 15 temporary shelters. Free kitchens have been opened to provide cooked food to the victims.

Earlier in the morning, one naval Seaking 42C helicopter was deployed for distribution of four tonnes of relief materials in the flood-effected areas. Rayagada collector had requested assistance of Indian Navy last evening. Despite inclement weather enroute, the helicopter got airborne from Naval Air Station INS Dega at Visakhapatnam and landed at Rayagada, where relief material provided by the district administration was loaded. The helicopter undertook the sortie along with personnel from the district administration and airdropped relief materials, where people were stranded and could not be reached by road.

Plus II student gang-raped on college premises in Sundargarh

Villagers Desert Homes Due To Vaccine Fear In Odisha’s…