Sushant Singh Rajput’s Fan Names A Star After The Actor! 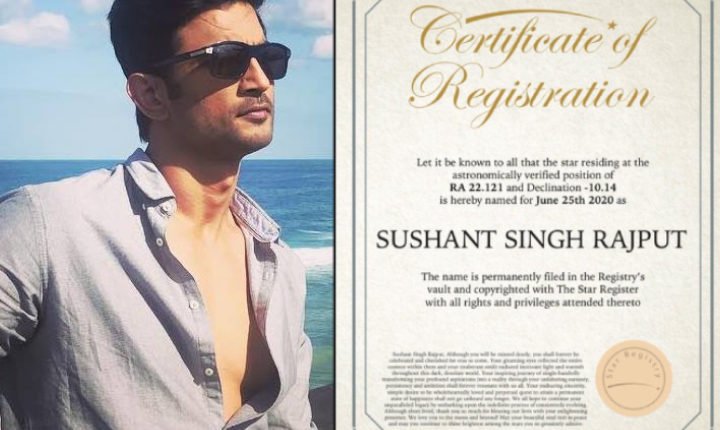 Mumbai: Bollywood actor Sushant Singh Rajput was fond of stars. After his demise, one of his ardent fans has reportedly registered a star in the actor’s name.

“The name has been permanently filed in the Registry’s vault and copyrighted with The Star Register with all rights and privileges attended thereto,” tweeted the fan.

The certificate reads, “Let it be known to all that the star residing at the astronomically verified position of RA 22.121 and Declination -10.14 is hereby named for June 25th 2020 as Sushant Singh Rajput.”

The fan shared a certificate on Twitter and posted, “Sushant had always been so fond of stars and thus I found it quite fitting to name one after him. Dizzy symbol, I shall forever be blessed to have witnessed such a beautiful and profound soul. May you continue to shine brightest.”

The fan further clarified that he has neither bought the star nor is it his property; he has just named it after the late actor.

“I would like to clarify that I did not purchase the star as it is not a property that can be bought. However, I believe I was able to name it after him as the website states. Although I appreciate everyone’s gratitude, it was simply a small gesture to convey my love,” he tweeted.

Sushant Singh Rajput died by suicide on June 14. An advanced telescope was one among Sushant’s most prized possessions as he loved gazing at the night sky full of stars.