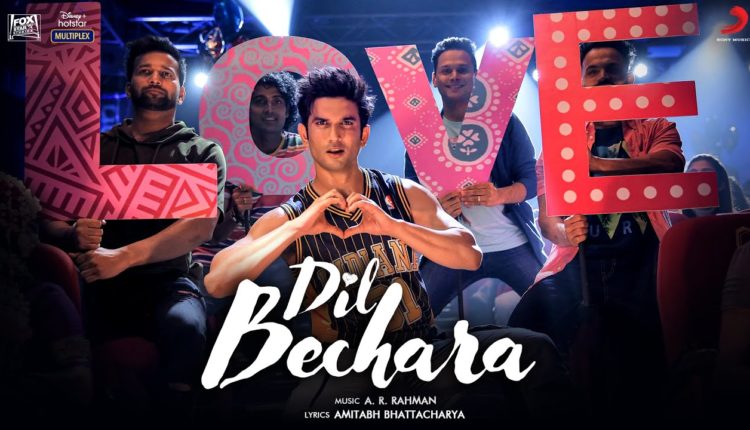 Mumbai: Sushant Singh Rajput’s fans are quite emotional about the actor’s last film ‘Dil Bechara’ and Komal Nahta earned their ire by giving a negative review to the film.

Noted trade analyst and film critic Komal Nahta, in his review of ‘Dil Bechara’, called it ‘dull and depressing.’

Nahta took to his Twitter handle and posted: “Sadly, neither does ‘Dil Bechara’ do justice to late Sushant Singh Rajput’s talent nor is it a good film. It is dull and depressing.”

Sadly, neither does ‘Dil Bechara’ do justice to late Sushant Singh Rajput’s talent nor is it a good film. It is dull and depressing. Read my review at https://t.co/6LBQeyEUmi pic.twitter.com/T1LTx13XfB

In no time, Sushant’s fans took to Twitter and started roasting the film critic for the poor review of their favourite actor’s last film.

One fan tweeted, “It is supposed to be sad and depressing. I assume you’ve neither read the fault in our stars by John Green nor watched the movie adaptation of the same name. I guess you were expecting masala bollywood touch with lots of dramatic scenes and maybe Sushant’s character miraculously dodging death and a happy ending. But you are extremely wrong sir.”

Venting his anger, another fan wrote: “Know your malaise intentions quite well. This is what was expected from you. Such a beautiful performance & still you say he cud have performed better. Maybe you wanted a Nepo kid in there and then u wud have gone gaga even if Nepo kid performance wud have 50% of wat sushant did.”

“I guess Komal is so trained to like the idiotic, stupid and mindless films of the rest of the Bollywood therefore he is unable to appreciate the real acting and a sensitive story. They have made this film as good as the Hollywood’s version which obviously he could not understand,” posted another.

Meanwhile, some netizens came out in support of Nahta and appreciated him for an unbiased review of the film.

One Twitter user wrote: “@KomalNahta that was the most appropriate & Fair review of dil bechara, though I’m a sushant fan from pavitra rishta & his jhalak times, but it cannot deny the reality that the story, direction & music of this film didn’t do the justice to  Sushant’s acting and talent.”

Another user wrote: “I’m glad you reviewed this film as fairly as you did. I believe Sushant would’ve appreciated this too. Just because it is his last film, doesn’t mean it mustn’t be reviewed for its cinematic abilities. When you retell a story like TFioS, you do not take away from it, the very.”

As soon as the film hit the digital platform on Friday, celebrated film critic Anupama Chopra backed off from reviewing the film stating that she cannot do an unbiased review of the film post Sushant’s demise.