Mumbai: A day after Sushant Singh Rajput’s brother-in-law and IPS officer OP Singh shared messages between him and a DCP in Mumbai requesting him to look into Sushant’s life, the late actor’s friend Siddharth Pithani shared screenshots of messages sent to him by OP Singh.

Siddharth, also known as Buddha, was a close friend of Sushant and used to live with him.

Singh reportedly sent the messages to Pithani in February after being unable to contact Sushant, who had reportedly changed his number.

His messages seem to ask Sushant to keep his sister away from his troubles and offered help if he needed. The message published in India Today read, “Appreciating that you are not in charge of your life, career or house, I am happy that I guessed the situation correctly and planned my visit accordingly.”

Another message read, “Please keep my wife away from your problems. It is because of company you keep, unhelpful habits and gross mismanagement. I am determined to ensure that my wife is not penalised only because she is good.”

He futher said, “Appreciating that I am the only one who can help you, I am still available. In case of need, tell whoever is in charge of your upkeep and maintenance — your girlfriend, her family or your manager — to work out a mutually agreeable arrangement with my office.”

The Mumbai Police recently responded to OP Singh’s informal request about Sushant Singh Rajput’s life by saying that no written complaint was registered. 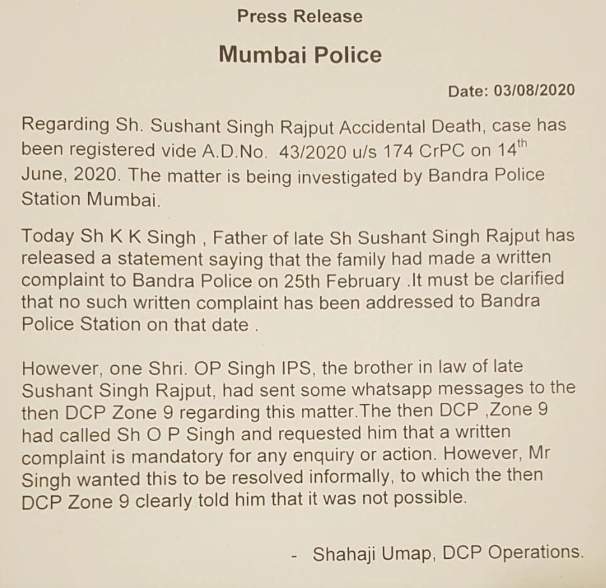 COVID-19: All Local Contacts Among 34 New Cases In Odisha’s Malkangiri

These Weird Habits Of Bollywood Stars Will Leave You…