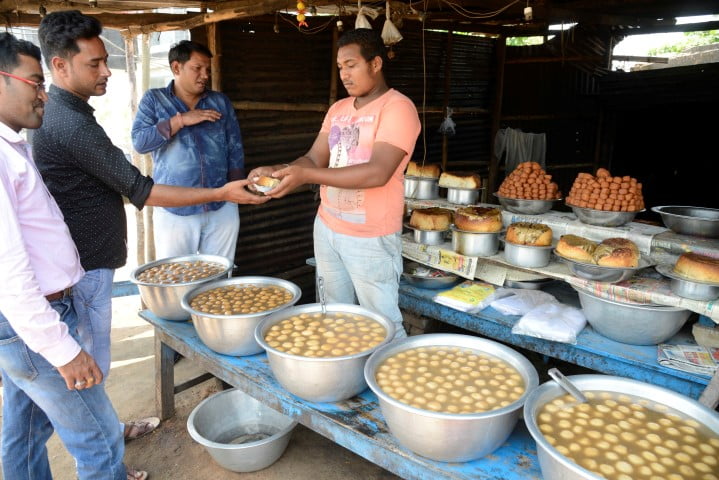 Bhubaneswar: The people of Odisha have been celebrating ‘Niladri Bije’ ritual of Lord Jagannath as Rasagola Dibasa every year.

On ‘Niladri Bije’, Lord Jagannath offers Rasagola to Goddess Laxmi to appease her, having left her behind while embarking on the annual sojourn to Gundicha Temple. The sibling deities enter the temple only after Goddess Laxmi accepts His apology in the form of Rasagola.

The celebration was initiated following a bitter battle between Odisha and West Bengal over the origin of Rasagola.

Referring to this ritual, historians and researchers have claimed Odisha to be the origin of the syrupy dessert since Rasagola is being offered in the Jagannath Temple since 12th century and Bengalis got to know about its preparations from the Odias. It also finds mention in Balaram Das’s Jagamohan Ramayan, Bhupati’s Premapanchamruta, and Niladri Mahodaya, they added.

Some Bengali researchers, however, agree to disagree with this.

Since Nabakalebar of Lord Jagannath in 2015, Odias world over have dedicated Niladri Bije to Rasagola.

Pahala, on the outskirts of Bhubaneswar, is famous for Rasagolas. A special event is held here on the occasion. The market is decked up with flowers to celebrate the occasion. “We also distribute Rasagola free of cost for a limited time during the event,” General Secretary of Pahala Rasagola Market Committee Niranjan Behera said.