Tackling City Floods: How About Making Bhubaneswar A ‘Sponge City’ By Switching To Permeable Pavements? 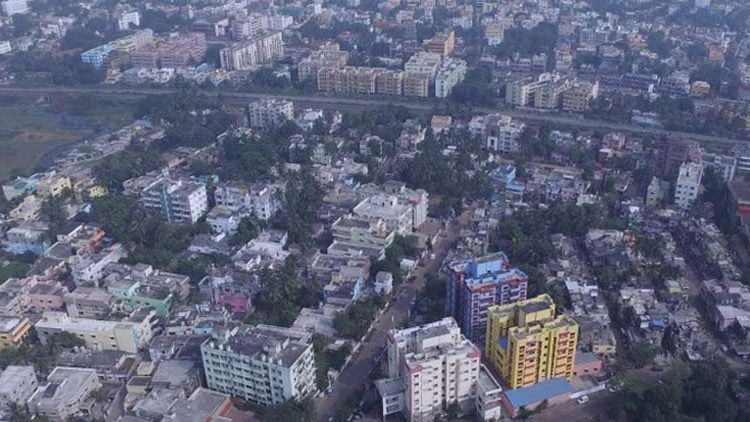 Roads, markets, parking lots and other public areas getting deluged during monsoon and throwing life out of gear is nothing new in Bhubaneswar. A poor drainage system and traditional flood defences further wreak havoc on the city. Yet we continue to concretise every bit of space available, not allowing rainwater to seep into the ground naturally.

The concretisation of Bhubaneswar is actually smothering the natural environment. The long-term risks from extreme rains and rising sea levels are already staring us in the face. It is time we pilot an ecologically friendly alternative by replacing concrete pavements with wetlands, green rooftops, and rain gardens, that will help absorb stormwater into the land. With concrete floors all over, only about 20-30% of rainwater infiltrates the ground, breaking the natural water circulation and causing waterlogging and surface water pollution.

Can we make Bhubaneswar a ‘sponge city’ – bouncing with the lusciousness of innovative green alternatives and banishing concrete from the pavements? We can pilot “sponge city” Bhubaneswar with ecologically friendly alternatives to traditional drainage systems. The city is facing imminent destruction.

A new type of mix called pervious concrete, which allows rainwater to permeate, reducing flooding and helping groundwater recharge could be the answer to Bhubaneswar’s flooding woes. Usual concrete is impermeable and hence precious rainfall water goes waste. According to experts, Pervious Concrete Paving Mixtures (PCPM) could be the answer because Pervious Concrete (PC) is a sustainable concrete material that is being used as a strategy for reducing stormwater-related runoff and recharging groundwater.

As part of a smart cities initiative of the Government of India, Pervious Concrete Pavement (PCP) mixtures were studied in the laboratory for different properties and implemented in the field to function as parking lots and walkways. Pervious Concrete, though relatively new and unknown to many city planners and administrators, has been widely used in low-volume road projects in western countries. The pervious nature reduces the water/floodwater runoff and mitigates urban heat islands.

The Bhubaneswar proposal was ranked no. 1 amongst the Smart City proposals in India and is the right choice of city to experiment with PCPM technology.  If this could be tried in a small stretch in the city, it will lead to a much better understanding of the differences between laboratory and field mixtures and can induce improvisations in the design of PCPs for future use. The use of concrete and bitumen pavement also contributes to rising temperatures in urban areas. Further, during rains, if the bed of the drain is pervious, some water seeps down and the effect of the flood is reduced. The use of this previous concrete in the small drains can reduce flooding by 70%, which experiments demonstrate.

There is no dearth of resources. The annual budget of the Bhubaneswar corporation is more than Rs 500 crore and there is a provision for Special Development Plans for the wards, specifically the underdeveloped wards. The green concept can be started there immediately. Bhubaneswar Smart City Limited (BSCL) has embarked on a large-scale makeover with a budget of Rs 190 crore, under City Investments to Innovate, Integrate and Sustain (CITIIS) programme of the Ministry of Housing and Urban Affairs. The development of the city landscape is a major component of this drive.

The Lingaraj Temple was renovated at a cost of approximately Rs 700 crore under the Ekamra Plan. Makeovers need not be only cosmetic. There is no reason to resort to superficiality in giving a long life to one of the most beautiful state capitals of the country. Bhubaneswar, on a nonstop sprint, is a socio-economic powerhouse, the epicentre of education, health and sports facilities, the political secretariat, and a cultural treasure that maps prominently in India and South Asia. India is flocking to Bhubaneswar. The quality of life in Bhubaneswar has to be one of the best in India. It drives Odisha, actively contributes to the Indian economy and in the coming years, is slated to play a major role in India’s strategic defence and global positioning.

In the recent horrific Bengaluru floods, when everyone seemed so helpless and hapless, we realised that the impervious pavements have converted the ground, which had permeable natural soil, into an impervious fabric. Hardened opaque surfaces have destroyed the natural porousness and softness of the surface. Change in the urban land use pattern has resulted in forcible changes in the hydrological characteristics of the urban stormwater runoff. The impervious bitumen/concrete pavements are constructed in the cities to improve connectivity in the city. Let people live first and then get connected.

Pervious concrete pavements are used in countries like the USA, Japan, China, etc., and mainly in parking lots because the parking lots have a large surface area, which can generate a significant amount of runoff, if impervious. This can also be used on low-volume roads, roads inside the residential/educational campus, etc.

In India, a few sections of pervious concrete have been constructed as part of the research projects at IIT Kharagpur and IIT Tirupati

Pervious concrete pavements provide a) a high degree of flexibility in stormwater management design and b) a good, skid-resistant riding surface and mitigate the problems associated with impervious pavements and urban heat island

It is inexplicable why the city management has not considered this simple alternative technology to avoid city flooding.  The Sponge City initiative can be launched with a few “model sponge cities” including Berhampur, Sambalpur and other hubs. The first thing is to try and restore natural waterways because that is the natural way to reduce the flooding risk.

As with the forests, in the past, we have plundered the land away from the water; now we need to give the land back or perish. Before it’s late, we can introduce innovations into Bhubaneswar’s urban fabric, and with redevelopments can include permeable materials and raised platforms like walkways to make the city naturally “spongy”.

Nothing works without a target. By 2025, we could aspire to have about 25% of the built area of each ward in Bhubaneswar have sponge city functions. At least 75-80% of flood water runoff should be captured, reused, or absorbed by the ground. This action will have a long-term impact on the sustainable development of the urban city.

Is this a tall order to make the beautiful Bhubaneswar liveable? We have everything that it takes to do this – the funds, manpower, administration, peace in the city and the big endorsement of Smart City, Sports City, Education City, Health City, and Tourism Hub.  Cannot we give our city this little return gift?

We as citizens should certainly make efforts to make water work for Bhubaneswar instead of against it.

Why Did Mr ‘Kutta’ Sorry, ‘Dutta’ Bark To Get His Name…