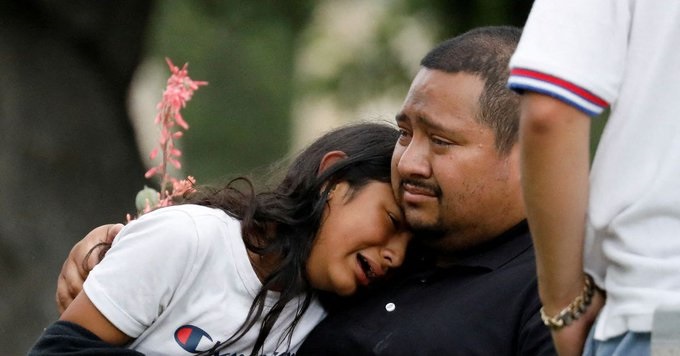 Uvalde (US): A teenage gunman opened fire at an elementary school in Texas on Tuesday, killing 18 children. Three more, including a teacher, were killed in the shooting.

A furious President Joe Biden urged the nation to stand up to the gun lobby and vowed to end the nation’s cycle of mass shootings.

It was the deadliest shooting at an American elementary school since the massacre at Sandy Hook Elementary a decade ago.

The teenage gunman went on a shooting spree just before noon at Robb Elementary School, where children from second to fourth grades in Uvalde, a small town about an hour from the Mexican border, were preparing for summer break this week.

The gunman, identified as an 18-year-old youth who had attended a nearby high school, also died at the scene, officials said. The gunman was killed by responding officers, they added.

Biden, returning from abroad, called Abbott from Air Force One and offered “any and all assistance” to the governor.

“It’s time to turn this pain into action for every parent, for every citizen of this country,” he said.

“It’s time for those who obstruct or delay or block commonsense gun laws — we need to let you know that we will not forget,” Biden said.

“Enough is enough,” Vice President Kamala Harris said at an event in Washington. “As a nation, we have to have the courage to take action.”

It was the deadliest shooting at an American elementary school since the 2012 shooting at Sandy Hook in Newtown, Connecticut, which left six staff members and 20 children dead, some as young as six years old.

Jagannath Temple In Odisha’s Puri To Be Shut For Devotees For 4 Hours Today; Check Timings