Tharoor Gets Bail For ‘Scorpion On A Shivling’ Remark About Modi 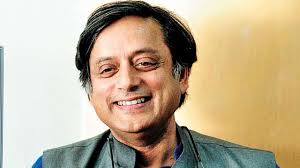 A Delhi court on Friday granted bail to Congress MP Shashi Tharoor, while asking him to deposit a personal bond of Rs 20,000, for his remarks comparing Prime Minister Narendra Modi to a “scorpion sitting on a Shivling”. Tharoor attributed the remark to an RSS leader, reports PTI.

At the Bangalore Literature Festival last October, Tharoor had said that Modi’s “personality cult” was not going down well with many in the RSS. He then claimed there was an “extraordinarily striking metaphor” with which an RSS member expressed the organisation’s frustration at its “inability to curb Modi”. He cited the RSS functionary as saying: “Modi is like a scorpion sitting on a Shivling, you cannot remove him with your hand and you cannot hit it with a chappal either”.

The Rouse Avenue Court Delhi court had asked Tharoor to appear before it on June 7.

Tharoor called the case frivolous. He also asked why the suit was filed against him now even though the quote was published in an article long ago.