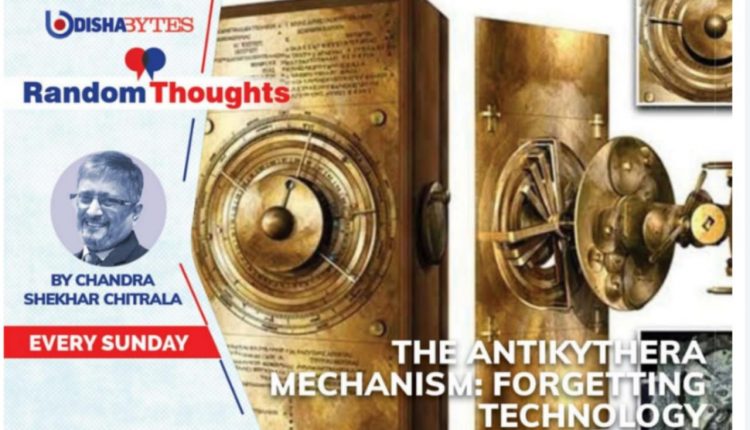 As someone fascinated by technology, reading about the oldest computer in the world was a revelation. More than 120 years ago, in 1900, a shipwreck was discovered off the coast of the Greek island Antikythera by sponge divers. It was identified as a Roman cargo ship and over the next year, a large number of artefacts, including statues, pottery, jewellery and coins, were discovered. Among the various artefacts discovered in the wreckage was a lump that appeared to be a wooden box containing something in it.

With attention being focussed on the more obvious treasures, it was only in 1902 that one of the archaeologists Valerios Stais found that one of the pieces of the lump had a gear wheel embedded in it.

He considered it to be some sort of astronomical clock, but this was rejected by most scholars who said that it was not possible for such a device to have been made with the technology available during the time it was supposed to have been made – the late second century BC or the early first century BC, that is more than 2000 years back, given that similar devices only became possible 1500 years later.

Over the years, with better imaging technology, in 2014, a study by Carman and Evans concluded that this device was probably even older, probably from 200 BC, further deepening the mystery of its origins.

As we got to know more of the device over the years, it was seen that by using nothing but an ingenious system of gears turned by a wooden handle, the device could predict a host of astronomical information including eclipses, phases of the moon, positions of the sun and moon in the various zodiac signs as well as positions of the five major planets of the solar system.

Interestingly, it not only accounted for leap years but also factored in the elliptical orbit of the moon by using a system of epicyclic gears, with a “pin-and-slot” mechanism to replicate the non-circular orbit. The fact that this knowledge of the moon’s elliptical orbit was not known then is even more baffling.

While the complexity of the mechanism has led to some attributing this device to non-terrestrial beings, this may have links to the works of Archimedes. This brings to fore the question of why the technology used to create it was lost for nearly 1700 years when similar devices could be made.

One explanation is the fact that human society has always been afraid of anything that could disturb the status quo. And one of the greatest disruptors is knowledge.

History is replete with instances of the ransacking of libraries and of religious zealots inflicting horrific punishments on anyone coming up with anything that could prove their dictates wrong.

As late as 1615, Galileo was investigated by the Inquisition and had to recant his opinions of the Earth revolving around the Sun as it contradicted the Church’s belief that the Earth was the centre of the universe, and spent his last days under house arrest.

Man has looked towards the skies for an explanation for his existence, and invariably, celestial bodies and their movements became intrinsically linked to religion. When those with a scientific bent of mind explored the skies and discovered facts that contradicted theories that had been embellished as facts in religious texts, it was natural that the guardians of religion did all they could to subdue these voices.

Therefore, it would probably be safe to say that the combined effect of the destruction of repositories of learning – either deliberately or by accident, coupled with natural calamities and active discouragement of knowledge contrary to established religious texts by champions of religions has led to the loss of previously acquired knowledge.

Unfortunately, this is true even today – it is a matter of sadness that strange as it may sound, even today we have a section of the population that still believes that the Earth is the centre of the Universe. Similar instances of superstition and blind beliefs being followed can be found everywhere. Hopefully, we will be wiser than our ancestors and prevent the hard-earned knowledge that we have gathered till now from being destroyed by simple-minded fanatics.