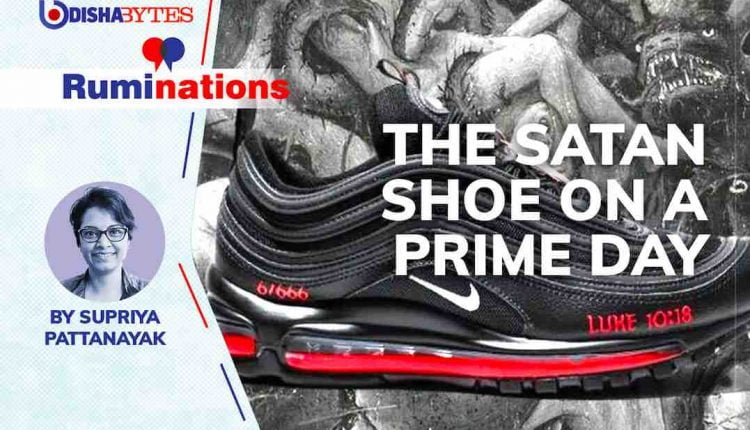 On a lazy Sunday morning, as I was browsing through my news feed an article about the global giant Amazon apologising caught my eye. Curiosity piqued, I clicked on the link.

Apparently, a British fishmonger had displayed his top-quality catch of the day as “Prime Day Boat Fish” both in his shop and on his website. Amazon’s overzealous lawyers sent him a notice saying there was a possibility that customers could confuse his advert for Amazon’s “Prime Day” sale. As we all know, “Prime Day” refers to a two-day event offering deals to its members and it has been trademarked by Amazon, of course.

Mr Moxton, the fishmonger, was not amused. He explained to them that not only had he been using the term since the last 30 years, way before Amazon was founded in 1994 but the term itself had been used by the fishing community over centuries. To be fair the legal firm saw sense and graciously apologised after “clarifying the root of the term ‘prime day boat’ in the context of the fishing industry”.

It is surprising in a sense that such a common term displayed in front of almost all fishmongers can be so easily trademarked. Come to think of it, “APPLE” is one of the most common fruits, with a child starting to learn the alphabet itself with A for Apple, yet it has been trademarked by Apple Inc for computers and computer programs.

Well, the clue lies in the word context, where it is used. A trademarked word, symbol or phrase is used to provide a company with a distinct brand image of a product or service, to avoid consumer confusion.

Apple has not been trademarked in the context of a fruit, where it is considered a generic term. However, it is considered to be a random word in the context of manufacturing and sale of computers. We can even trademark it for say a real estate company, if not already done so. Meanwhile, we can safely use “Apple” in our daily life to reference the fruit without getting into trouble with APPLE Inc. but we will struggle to trademark it as such.

A “prime” example of effective trademark protection would be the case of “The Satan shoes”. In early 2021, the collective MSCHF, in collaboration with rapper Lil Nas X, injected a drop of its employees’ blood mixed with red ink into the soles of 666 pairs of red-and-black Nike Air Max97 trainers. It even added a pentagram and the words “Luke 10:18” on the side, a reference to the Bible passage, “I saw Satan fall like lightning from heaven” and named them after the Devil himself. They were priced at just over 1000 dollars, yet they sold out in under a minute of being available online with their resale value increasing multiple times. This was a follow up from their previous line of “Jesus shoes”.

MSCHF advertised them as limited-edition art rather than footwear and it was aimed at making a statement and drawing attention to social issues. However, they were still heavily modified Nike shoes with the Nike logo on them, created without their consent so unsurprisingly Nike had objections. They sued MSCHF claiming in an official statement that the “Satan Shoes [were] likely to cause confusion and dilution and create an erroneous association” between MSCHF’s products and them as “MSCHF altered these shoes without Nike’s authorisation. Nike had nothing to do with the Satan Shoes or the Jesus Shoes”.

Within a week Nike got a restraining order and later agreed to a settlement as part of which MSCHF had to offer full refunds to customers and remove the shoes from circulation. Financial loss aside, they did create a heavily discussed controversy. Personally, I believe MSCHF and Lil Nas X achieved their desired objective but we digress from the topic here.

Trademark also reminds me that the fastest man on Earth, Usain Bolt, last I checked at least, has not only trademarked his name but also his signature “lightning bolt” victory move. Yes, you can trademark gestures too.

Sometimes the trademark terms become so popular that instead of protecting the brand they become part of our common language and lose the ability to create a unique identifier. Words that are strongly protected today may become everyday terms in the next decade.

A case in point would be words like Kerosene and Escalator. They were actually coined and trademarked in the 19th century by their inventors. Subsequently, they became widely used and were assimilated into common language as generic terms, so the trademark was lost in the 20th century as it was not deemed fit for exclusive identification. It will be interesting to see what else our evolving language absorbs and how it reflects the changes in our society. Probably a word like Google is going in that direction, given how often it is now used as a verb.

While on the subject, we should be careful to use table tennis rather than ping-pong and never recreate the Post-It’s specific shade of yellow or the Barbie Pink amongst others, as they are all trademarked. Furthermore, if we ever sang “Happy birthday to you” before 2015, Warner Chappell Music may have come calling to pay them licensing fees as they owned the rights.

However, be assured that if we are not making money from commercial use and sometimes giving credit where due, no one will bother us with lawsuits. After all, trademarks are all about protecting to ensure monetary returns. Rest all is optics.