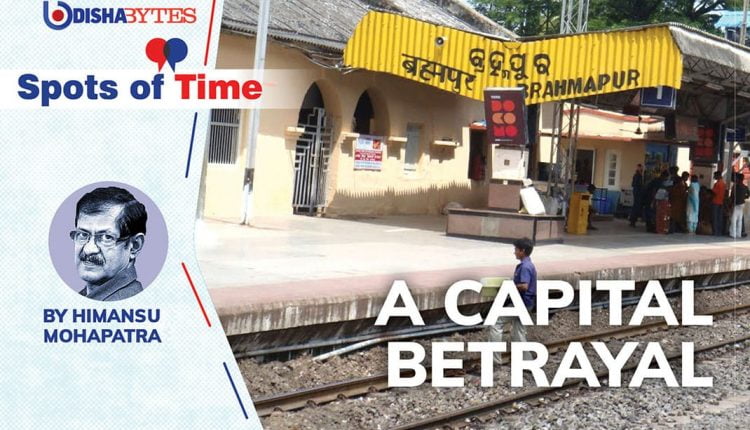 From early childhood, fear of trains was ingrained in Subrat. A stage has now come when he clung on to them for dear life.

From a terrible fear of the train, he had gone to a fatal embrace of it. In short, he had become a reluctant member of that amphibian species called commuter, his life parcelled out between land and wheels, raised six inches above the ground.

It was 2.30 am in the night. Poor-go-to-sleeper that he was, this was his time for a brief immersion into that blessed river of oblivion that flows nightly, enfolding all mortals in her lap before the day arrived with its myriad clamours. Instead, Subrat was up and about, giving a final check to his airbag. In less than 15 minutes he would be out of the house, as Swarnima closed the door behind him. His long trek to the railway station through a deserted town would begin.

His erstwhile colleague at Berhampur University, Gyanendra, was comfortably asleep in his house in the same neighbourhood. He had no reason for this chilling brush with the terror of the night and its many hidden dangers. Subrat, however, was trudging through the narrow lanes of Chandraprava Street in Berhampur at this very moment. He felt marked out for a different fate.

How ironic that all this frantic effort was aimed at securing a berth in a 3-tier coach in the relatively less congested East Coast Express! But there was no avoiding it. He needed to grab a berth to lie at full stretch and catch a bit of sleep until he reached Bhubaneswar three hours later.

In adopting this unearthly hour of travel for the past one year he had taken after scores of daily commuters. Behera Babu, the oldest among them, had said to him:

“Why don’t you take one of these very late night trains, professor sahib? You’ll sleep and travel. DMU is horror. Minus toilet, it’s a misnomer for a train.”

DMU, short for Diesel Multipurpose Unit, had been recently introduced for daily commuters amid much brouhaha.

Behera Babu certainly knew better. For them, the train was an extension of home. They preferred to reach their destination, refreshed after their power nap in the train. More than the power nap, Subrat relished the prospect of hassle-free travel and the early morning arrival. He could fit in an hour or so of preparation for his upcoming class. It was of course no better than taking a sip of water to live just a little while longer.

The alternative was much worse: travel early in the morning, scramble for a seat in the DMU, hold your urge for number 2 infinitely. Plus the added struggle for Subrat to read the constantly moving lines of a book amid the piercing din of the train and the howling of daily commuters, engaged in their card game.

That night, of course, was no different from many other Sunday nights when he started his walk from home towards the railway station at the godforsaken hour. The images of Swarnima, his wife, and Anisha, his daughter aged 15, receded with every step he took. They were the only people who cared about him. Yet he was leaving them uncared for until he returned home the next weekend.

As he walked, keeping a weary but alert eye on the street dogs sleeping curled up on the roadside, he wondered what came of his big triumph of 1994, the one that had landed him in Bhubaneswar.

Four years ago his luck had turned. Despite being the dark horse among seventeen, he had topped the open competition for the post of Reader in English at Utkal University. For a few weeks, or maybe months, he had worn with pride the label – not self-coined but embraced nevertheless – of ‘giant killer’, as he had bested the top guns of English in Odisha.

But to what avail? Try as he might he couldn’t pull off Swarnima’s transfer from Berhampur to Bhubaneswar. Honour, goodness and justice were not the currency with which the capital city went to business. He saw his colleagues rub it in daily with talk of their connections in the power corridors.

A line he had read in Achebe’s A Man of the People rang truer than ever: in the capital city not what you knew but whom you knew mattered.

As Subrat clambered onto the middle berth of a coach in East Coast Express that night, he could see his future crushed under the wheels that trundled endlessly on parallel tracks. He could feel his best and most creative years dissolving into a black hole.

To this list was added Bhubaneswar, the Big B among these names.

It had flattered to deceive. It was B for Betrayal.

(This is episode one of the Flash Fiction series to be run under the rubric “Spots of Time”.)

Himansu S. Mohapatra is a noted academic and translator.