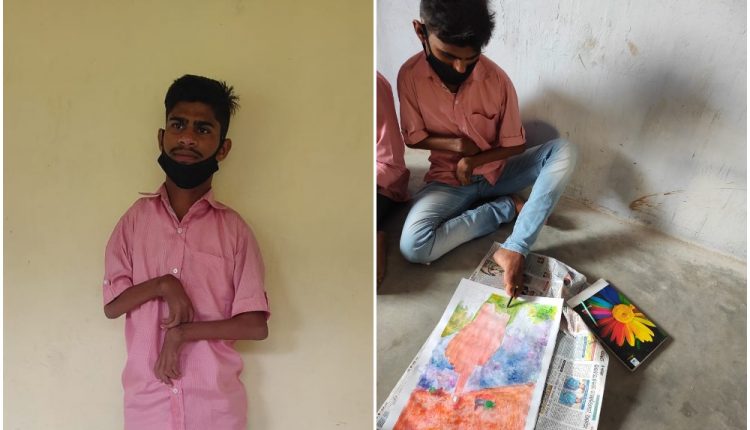 Berhampur: Seventeen-year-old Biranchi Badatya cannot use his hands, paralysed by polio since birth.

Undeterred, Biranchi, who wants to be an artist, did not want his disability to come in the way of his dreams.

He started drawing with his foot. He became good with time and practice. Gradually, people started noticing his amazing ability and works, encouraging him along the way and proving that one’s disability isn’t necessarily a hindrance in the way of chasing one’s dreams.

He dreams of becoming a renowned artist one day and bringing laurels to the state.

Biranchi, the only son of Prakash Badatya and Joytsna, residents of Chudangapur in Ganjam district’s Sanakhemundi block, now studies Arts at Biswasray Science College in Patapur after scoring 85 per cent in Class 10.

He started drawing with his foot since his primary school years. It was his art teacher Amar Nayak who encouraged him all along to keep at it and not give up.

As he got better and better, Biranchi came into people’s notice, bringing recognition and then awards.

He was awarded by Ganjam Collector Vijay Amrit Kulange when he was a student at Odisha Adarsha Vidyalaya Chanameri during 2014, and by Chief Minister Naveen Patnaik during 2018 for his unique ability to draw with his foot.

Despite his talent and the recognition that has come with it, Biranchi, who comes from a poor family, cannot afford the cost of canvas or colours, so critical to keep his dreams alive.

The town’s residents have come out in support, demanding that the authorities fully support the boy, who is a source of pride for them.