This Devi Temple In Odisha’s Gajapati Opens Only During Navratri 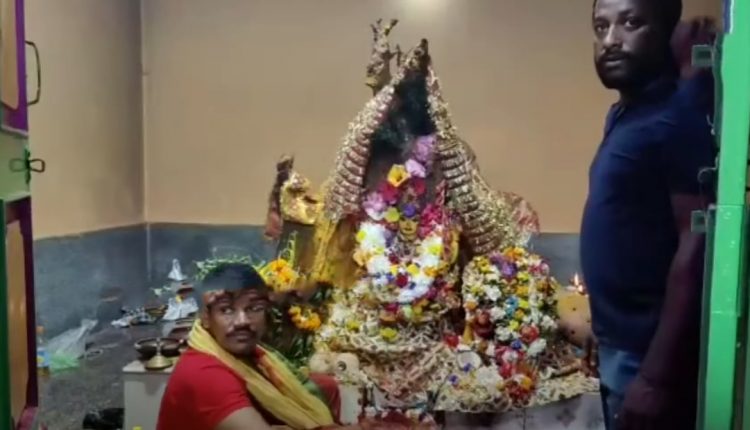 Pralakhemundi: Like all Devi shrines in Odisha, Danda Maa Peetha at Parlakhemundi in Gajapati district is also agog with Dussehra celebration. The only difference here is that the devotees get opportunity to offer puja only during the Navratri.

As per the practice since its inception, the Devi shrine Situated near Dolabandha in Paralakhemundi remains closed round the year. Neither the deity is offered puja nor the devotees visit the temple. But its premises come alive during Nabaratri when it is opened for puja as well as for the visit of the devotees.

The main priest of the temple said they have been following the practice of keeping its doors closed. But he could not elaborate the reasons for it and said the rituals of Devi differ from place to place depending on the practices adopted at the time of installation.

“The door of the temple open only in Aswina month of Odia calendar every year. The deity is worshipped, yajna performed and prasad offered from the beginning of Navratri,” he said.

During these 9 days, the devotees also have darshan of the deity, offer puja and perform yajna on the temple premises. Besides Gajapati district, devotees from across Odisha and outside also visit the temple during Navratri, the priest said.

“The temple’s doors are closed again after completing Devi’s puja on Dasami and performing the final rituals. As per the practice, the deity remains confined to the closed temple from second Tuesday after Dasami,” he added.

Before closing the doors of the temple, a coconut is kept in an earthen pot as an offering to the deity. When the doors are opened are opened after one year, the coconut remains as fresh as it was kept and is distributed among the devotees during Navratri.