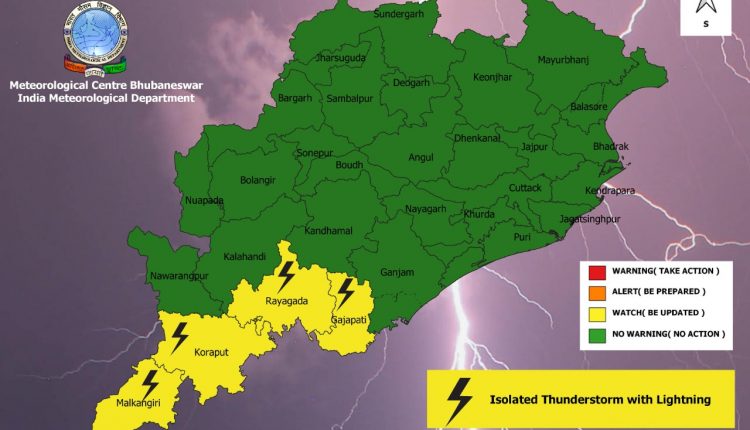 Bhubaneswar: Thunderstorm with lightning has been forecast for several Odisha districts across for the next two days.

The India Meteorological Department (IMD) on Friday issued Yellow Warning of thunderstorm with lightning for the districts of Malkangiri, Koraput, Nabarangpur, Rayagada, Kalahandi, Kandhamal, Gajapati, Ganjam, Sundargarh, Keonjhar and Mayurbhanj from today till tomorrow 8.30 am.

Similar weather condition is likely to prevail over the districts of Malkangiri, Koraput, Rayagada and Gajapati from October 9 to 10 morning.

The IMD forecast about a possible low-pressure formation in the north Andaman Sea around October 10 and there is a likelihood of it hitting Odisha coast mid-month.

The low-pressure will become more marked and move west northwestwards towards south Odisha and north Andhra Pradesh during the subsequent four to five days, the IMD said its bulletin.