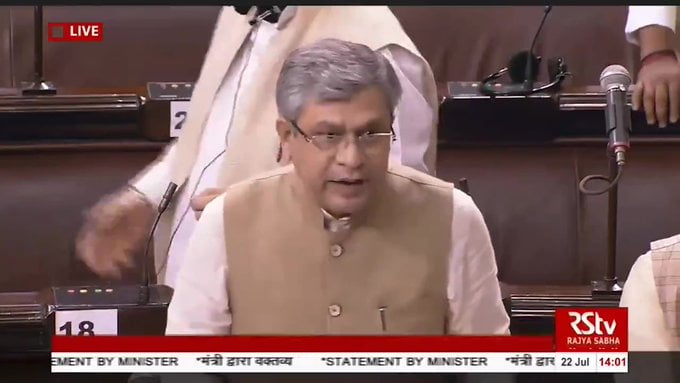 New Delhi: Rajya Sabha witnessed bedlam and was adjourned on Thursday after Trinamool Congress (TMC) MP Santunu Sen tore papers that appeared to be copies of the statement of Electronics and Information Technology Minister Ashwini Vaishnaw on the alleged snooping using an Israeli company spyware Pegasus, and flung the pieces in the air.

TMC and other opposition party members had rushed into the well of the House when IT Minister rose to speak on ‘Pegasus’ media reports. Sen snatched his papers, tore, and flung them at Deputy Chairman Harivansh Narayan Singh.

Amid the uproar, Vaishnaw was forced to cut short his statement and lay the paper on the table instead.

He said, “A highly sensational story was published by a web portal on July 18, 2021. Many over-the-top allegations were made around this story. The press reports appeared a day before the monsoon session of Parliament. This can’t be a coincidence.”

In the past, similar claims were made regarding the use of Pegasus on WhatsApp. Those reports had no factual basis and were categorically denied by all parties, including in the Supreme Court. The July 18 press reports also appear to be an attempt to malign the Indian Democracy and its well-established institutions,” he added.

#WATCH A highly sensational story was published by a web portal on July 18. Many over-the-top allegations made around this story. The press reports appeared a day before monsoon session of Parliament. This can’t be a coincidence: IT Minister Ashwini Vaishnaw on ‘Pegasus Project’ pic.twitter.com/uoYjqaUUJo

BJP MP Mahesh Jethmalani said TMC members tried to snatch the papers from the Union Minister’s hand and tried to tear it also. They also shouted at Hardeep Singh Puri. “It was appalling behaviour,” he said.

BJP MP Swapan Dasputa said it seems that some TMC MPs took the paper from the hands of Vaishnaw while he was speaking on ‘Pegasus’ and tore it up.

“This sort of behaviour is something which democracy has never seen and we have seen earlier how they conducted themselves when PM was addressing and introducing the new ministers in the Parliament,” MoS MEA Meenakashi Lekhi said.

Samajwadi Party MP Ram Gopal Yadav said that if someone snatched away the paper then it is not right. “I was late and could not see the whole thing,” he added.