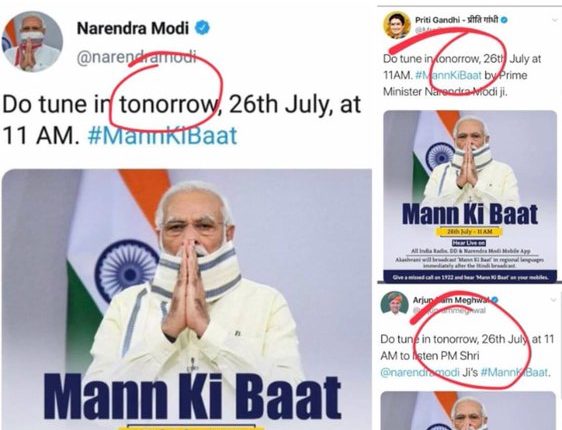 New Delhi: You will be surprised to see what all can trend on Twitter. The most recent is ‘TONORROW’. Yes, you read it right, Tonorrow is trending on Twitter India. Lets clear the air of confusion about it.

On Sunday, July 26, Prime Minister Narendra Modi was to hold his Mann Ki Baat on successfully completing six years in office. A tweet informing people about the same went out from Narendra Modi’s handle and it had an embarrassing typo.

The now corrected post had the word ‘tomorrow’ mistakenly written as ‘tonorrow’. After this, several ministers from Bhartiya Janta Party (BJP) copy-pasted the same tweet, after which Twitterati started trolling them all.

This led to a series of memes, jokes and the word tomorrow itself trending on twitter. Check some of the funny ones here.

After see #tonorrow is trending on twitter
Sarfraz and umar akmal pic.twitter.com/j7X1IsSmvj

This one is for the potterheads!

This one is actually true.

Priti Gandhi was actually me in 1st std when my teacher by mistake wrote ,The sun rises in west and i didn’t accepted that the Sun rises in east until my dad called my teacher and she said to me , Its east beta. The day i realized teachers too can be wrong sometimes #tonorrow pic.twitter.com/lTjqDnuC88