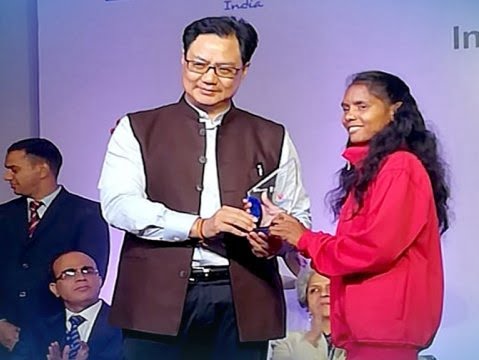 A tribal girl from Kandhamal district has been conferred with the prestigious Unicef-sponsored V Award at the UN House in New Delhi for her resolve to end child marriage and promote education among girls in her area.

Jhulima Mallick (22) hails from Bandudi village under Khajuripada block in Kandhamal district. She has made her state and village proud by become the only volunteer from Odisha among the 10 winner selected from across the country.

Minister of State of the Ministry of Youth Affairs and Sports Kiren Rijiju presented her the award on the occasion of International Volunteers Day on December 6.

Jhumila had a difficult childhood. She had to drop out of school in Class X due to financial problems. She successfully stopped her parents from getting her married and joined an NGO where she started ‘’Save The Children’ campaign. So far, she has saved 12 girls from early marriage.

Jhumila has now re-enrolled herself in school, and persuades other girls to do so too.

Apart from child marriage and child rights, she has also created run campaigns against Malaria and other vector-borne diseases.

Chief Minister Naveen Patnaik has also congratulated her on winning the award.