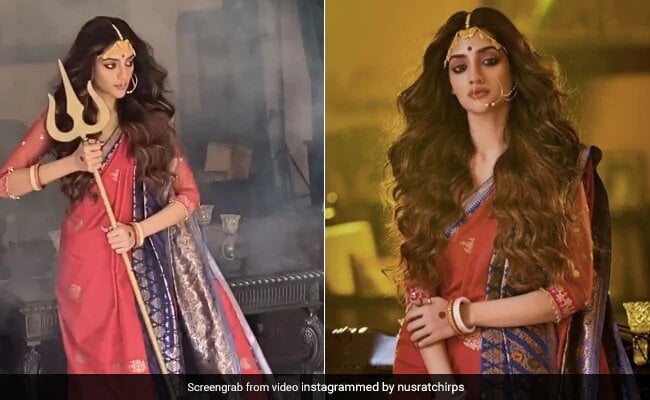 Kolkata: Trinamool Congress MP and film star Nusrat Jahan is in the news once again. This time she dressed up as Goddess Durga for advertisements for a clothing line and has been receiving death threats on social media thereafter. She had posted the photos on Instagram on September 17, NDTV reported.

The actor left for London on September 27 for a film shoot but her office has alerted authorities, the report added.

She is seen holding a trishul in the ads. The threats are from India and Bangladesh, the report said.

“We have taken up the matter with the Bengal government and the Ministry of External Affairs, who are in turn coordinating with the Indian Embassy in London (UK), for protection, as an additional security measure,” NDTV quoted a close aide as saying.

“Ms Jahan has always stood for her secular and inclusive viewpoints and these trolls do not deter her,” he added.

Earlier, Jahan was slammed for marrying a Hindu and created a furore for wearing ‘sindoor‘ or vermillion and participating in rath yatra soon after. Photos of her at Durga Puja pandals last year with her husband had gone viral and drawn abuse, the report added.
Nusrat Jahantrinamool MP
0
Share FacebookTwitterGoogle+ReddItWhatsAppPinterestEmail

Nusrat Jahan To Be Special Guest At ISKCON Rath Yatra In…

Newly-Elected TMC MPs Trolled For Their Attire In Parliament