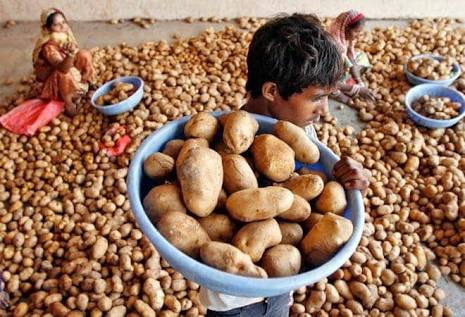 Bhubaneswar: Two days after the Central government excluded potato from the Essential Commodities Act, the tuber price has gone up abnormally in Bhubaneswar market hitting the common man hard.

The potato, which cost Rs 20-22 per kg a couple of days back, was sold at Rs 30 per kg on Friday. While market watchers claimed that the wholesalers have hoarded the staple vegetable for export after changes in the Essential Commodities Act, the consumers blamed the retailers.

According to the sources, the potato is available at Rs 2,000 to Rs 2,500 per quintal in the wholesale market. Normally, the retailers sell it with a profit of Rs 4 per kg. The sudden rise of the price to Rs 30 per kg has put the blame on the retailers.

The situation has further worsened with West Bengal severely hit by cyclone Amphan as Odisha mostly depends on the neighbouring state for importing the potato.

While Bhubaneswar needs 250 tons of potatoes per day with demand some times crossing 300 tons, now 150-200 tons are coming from Bengal after Amphan, the sources said.

With lockdown continuing for over three months in the wake of COVID-19 pandemic, earning livelihood has become a tough proposition for low income group, particularly daily wagers, industrial workers and others. As the income has dwindled to a great extent, they find it tough to afford the costly potato in their daily diet.