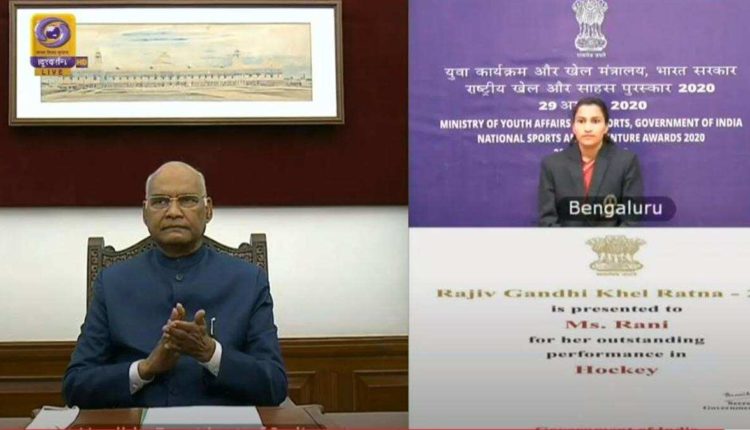 New Delhi: In a first, this year’s National Sports Awards ceremony was held virtually due to the COVID-19 pandemic, with most winners logging in from nine designated Sports Authority of India locations and National Informatics Centres across the country to hear their names being announced on Saturday.

The awards are conferred on National Sports Day celebrated on August 29, the birth anniversary of hockey wizard Dhyan Chand.

In his virtual address at the awards ceremony, President Ram Nath Kovind congratulated all the winners and pointed out the immense talent that the country has produced to excel in the field of sports.

The President said three out of the five Khel Ratna awardees this year were females, “which shows that the country is taking the step in right direction”.

He also reiterated India’s aim to finish in the Top 10 at the 2028 Olympics.

On their part, the award recipients were pleased that the ceremony took place even amidst the COVID-19 pandemic.

“I am very happy that the awards ceremony is taking place during the National Sports Day in spite of the Covid situation. The Sports Authority of India has taken a very positive decision to host the ceremony virtually despite all odds,” said para-athlete Sandeep Chaudhary, who won the Arjuna Award.

Table Tennis player Manika Batra, who received the prestigious Khel Ratna Award, said she is excited for the ceremony.

“We have to accept the fact that the pandemic has brought life to a standstill but I am no less excited about this ceremony,” said the star paddler.