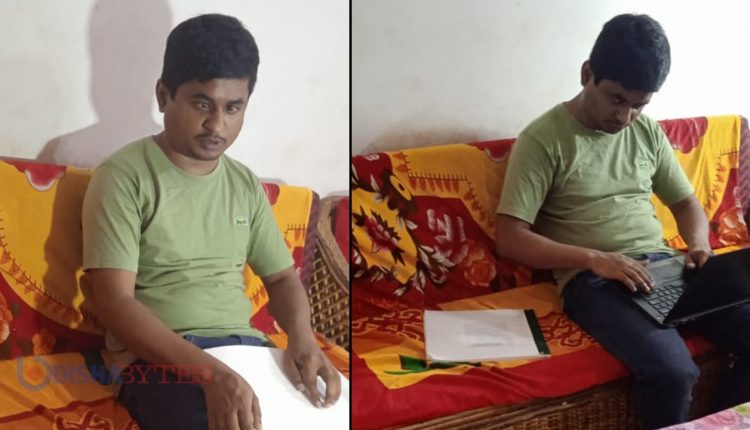 Bhubaneswar: Translating dreams into reality becomes tough for many, but Prasanna Panda has turned adversities into an opportunity through strong will power and grit to achieve success.

Despite being completely visually impaired since birth, he has cleared the Odisha Civil Services Examination through patience, perseverance and hard work. Securing 266 rank in the examination for 2020 results of which were declared on Friday by the Odisha Public Service Commission (OPSC), Panda has proved that disabled are able enough to achieve their goal in life.

Prasanna, who is pursuing his PhD at Jawaharlal Nehru University in New Delhi, is one of the two completely visually impaired candidates to have cleared the state administrative service examination. The other candidate is 25-year-old Prachurya Pradhan of Boden in Nuapada district.

Hailing from Balugaon in Khurda district, Prasanna cleared the examination in the second attempt. When he was in Red Cross School for Blind at Bhawanipatna, he came across the then Collector who used to organise various workshops for career counselling and confidence building of differently-abled students.

Stating that he drew inspiration from the officer, Prasanna said he asked him if a blind person can become a collector. The officer told him that physical disability is no deterrent if one is dedicated and confident of cracking the civil services. “I follow his inspiring words even now,” said Prasanna.

After completing his school education from Bhima Bhoi School for Blind and college education from BJB College, Prasanna moved to New Delhi to study at JNU. He completed his PG last year and is doing PhD now.

Prasanna said he is keen to work for Koraput-Balangir-Kalahandi (KBK) region and also for development of tourism in Chilika and socio-economic development of communities dependent on the lake. As his village is located near Chilika, he is aware of the livelihood issues the fishermen community faces in the area.

Similarly, Prachurya secured a rank of 292 in the examination in his first attempt. Currently working with Odisha Mining Corporation, is also pursuing his PhD in Commerce at Ravenshaw University, Cuttack.

A chess player who has won silver medal at the 3rd Asian Para Games held in Jakarta, Indonesia in 2018, Prachurya was felicitated by Prime Minister Narendra Modi for his feat, reports said.

Apart from Prasanna and Prachurjya who are 100 per cent visually impaired, four other blind candidates, with 40 to 60 per cent blindness, are among the 392 who cleared the prestigious competitive examination.

President of Odisha Association for the Blind and Odisha’s first visually-impaired OAS officer Sanyas Behera congratulated the rank-holders. A total of 15 differently-abled candidates have reportedly cleared the examination.

Online Application For OTET Phase-2 To Begin From Next Week; Check Details