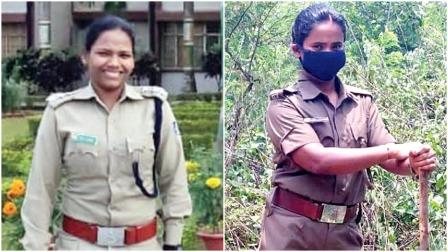 Bhubaneswar: Two eminent women international Rugby stars belonging to Odisha are now in charge of the security of flora and fauna of the state.

Hailing from the Sabar community and a native of Dalabhaga village near Khuntuni in Cuttack district, Bhagyalaxmi Barik got a Forest Ranger’s job in the sports quota in October last year. At present she is undergoing training at the Regional Chief Conservator of Forest (RCCF) office in Ghatikia on the outskirts of Bhubaneswar.

About her new assignment, the ace Rugby player said though she has a major responsibility of safeguarding the forest, she aims to make the national women’s team qualify for the next Asian Games and Olympics.

Bhagyalaxmi joined the Kalinga Institute of Social Sciences (KISS) in 2007. With her strong physique, the sports instructor of KISS, Rudrakesh Jena inducted her as a member of the KISS Rugby team. She made her debut in an international Rugby tournament in Mumbai where she displayed her immense skill and stamina.

Till now, Bhagyalaxmi has participated in 11 national level tournaments. She has played a major role in making Odisha a champion state team of the country six times.

Another Rugby star, Subhalaxmi Barik, a close friend and team mate of Bhagyalaxmi, got the job of a Forest Guard in 2013 in recognition of her success in the national and international events. However, within a few months of joining, she became an eyesore for her superiors after she brought serious corruption charges like tree felling, timber smuggling and ganja cultivation in Jharsuguda against them.

Alleging harassment by the authorities, she went on a hunger strike and later moved the State Commission for Women and the Orissa High Court. After waging a legal fight for one year, she was absolved of all the charges levelled against her.

Two well-known trainers of KISS, Manas Kumar Jena and Dhiren Kumar Rout had picked her as a member of the university Rugby team in 2011.

Subhalaxmi is now posted as a Forest Guard in Chandaka Sanctuary on the outskirts of Bhubaneswar. However, her father Lingaraj Barik regrets that though his daughter has been working since seven years and despite her immense success in national and international Rugby events, she has not been promoted to a  higher rank.