U-17 Women’s World Cup: India Put Up Better Show, But Concede 3 In 2nd Half Vs Morocco 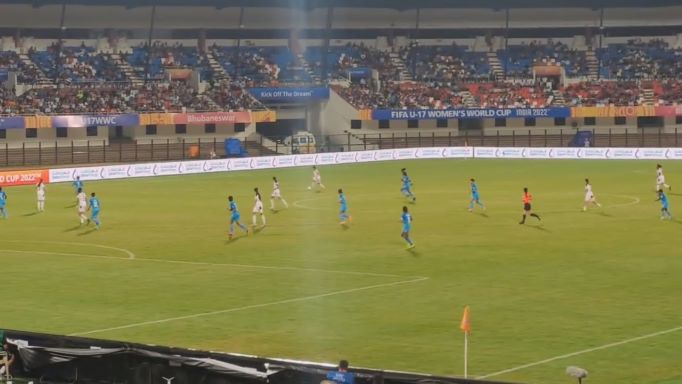 Bhubaneswar: The Indian girls brushed aside their nightmarish performance in the FIFA U-17 Women’s World Cup campaign-opener to give a much better account of themselves against fellow-debutants Morocco here on Friday evening.

But they ran out of gas in the second session to let in 3 goals, without managing to score, at Kalinga Stadium.

The Group A fixture was goalless for 50 minutes before Doha El Madani converted a penalty kick.

Yasmine Zouhir doubled Morocco’s advantage in the 62nd minute, and Djenna Cherif made it 3-0 in the first minute of stoppage time.

The stats sheet showed that Indian girls, who lost 0-8 to the USA three nights ago, had improved in their second match. The Indian girls had 38% of possession, 3 shots on goal (as against Morocco’s 20) and 3 corners (against rivals’ 20).

But a goal eluded the Thomas Dennerby-coached home team, which will face Brazil in their final group league engagement on October 17.

Earlier in the day, Brazil and USA played out a 1-1 draw at Kalinga Stadium. Nicollette Klorpes put USA ahead after 33 minutes, but Brazil got back on level terms four minutes later through Ana Carolina Firmino.