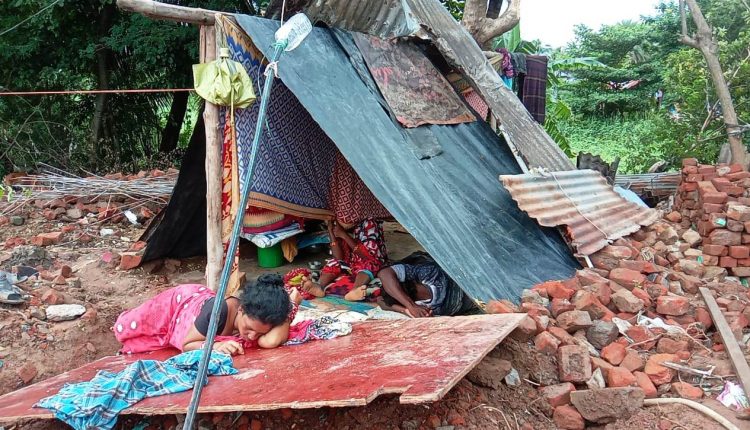 Berhampur: More than 100 families of Odisha’s Berhampur city are leading life under open sky after their houses were demolished two days back allegedly without taking rehabilitation measures for them.

The Berhampur Municipal Corporation (BeMC) carried out demolition of 109 residential houses at Gaudabandhi Basti of Lanjipalli under Ward 37 on Wednesday, rendering the families without shelter. With no place to say, the affected families are living in temporary tents after collecting the household articles from their demolished houses.

While the BeMC has not provided any relief materials, they find it tough to cook inside the tents. Some of them, who do not have tarpaulins or polythene sheets, are spending nights under open sky.

Santosh Das, one of the displaced persons, said he was asked to deposit Rs 40,000 to avail a house under Rajiv Awas Yojana. “I am a daily labourer. How would I arrange so big an amount? If the administration does not provide a house, my family would spend rest of life in this tent,” he said.

Speaking in similar vein, other affected persons said they did not want to leave their home and hearth. They wanted to stay in the Basti and demanded the authorities to provide them houses there.

The corporator of the Ward, Banita Sahu, said even as the municipality has demolished their houses, these people do not want to leave the place. “They are ready to live in difficulties instead of being rahabilitated elsewhere. The BeMC should have taken their views before going for the demolition. Since it concerns their sentiment, the municipality should construct houses in the Basti,” she said.

On the other hand, the BeMC, in a press release, has stated that the houses in the Basti were demolished on the instruction of the National Green Tribunal. All 109 families have been distributed official letters for their rehabilitation in Nehrunagar and Aina Bandha under Rajib Awas Yojana.

Before initiating the demolition drive, the residents of the Basti were requested through public address system to shift to their respective houses in the rehabilitation places after collecting the official letters from the municipal office. They can verify it from the office and contact the help desk in the housing section in case of any problem, the release stated.

U-17 Women’s World Cup: India Put Up Better Show, But Concede 3 In 2nd Half Vs Morocco