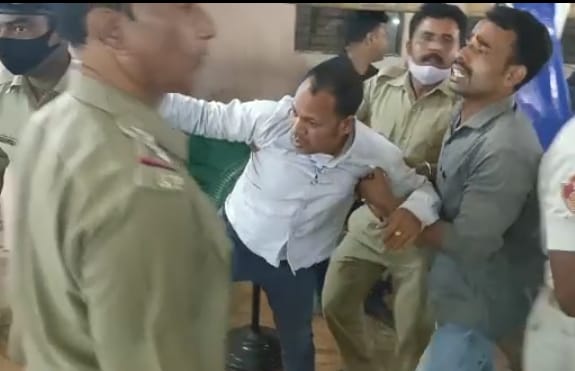 Bhubaneswar: Police resorted to lathicharge to disperse an angry mob which was attacking a youth for allegedly trying to enter the strong room in BJB Autonomous College, here for tampering the EVMs on Friday evening.

According to sources, the youth, hanging an identity card around his neck, tried to enter the strong room where the electronic voting machines (EVMs) used in the elections to Bhubaneswar Municipal Corporation (BMC) have been kept. Suspecting that he was going to tamper the voting machines, the workers of different parties camping at the spot caught hold of him.

Even as they were questioning him, a crowd gathered there and started beating up the youth whose identity has not been ascertained. As the police deployed there were outnumbered by the agitated people and the situation worsened, additional forces were rushed to the college.

With the angry mob not heeding the appeal of the police to disperse, the latter resorted to lathicharge and rescued the youth from the clutches of the people. Later, the youth, who was bleeding in the attack, was admitted to a hospital.

Senior officials and district administration also arrived at the spot and tried to pacify the agitated people to restore normalcy.

Counting of votes, polled during urban local body elections on Thursday, will be held on Saturday.