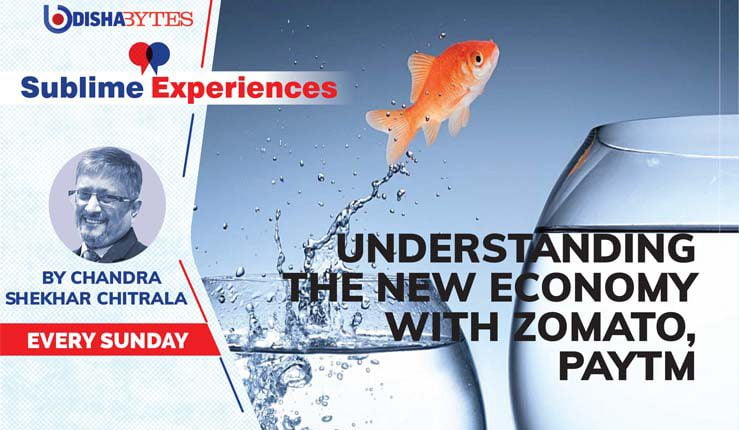 One of the items that has been hogging business headlines the past few days is the Zomato IPO. And it should, in terms of what it implies, not just for those who invest in the stock markets but for all of us as well.

The estimated market capitalization of Zomato is Rs 60,000 crore while it could touch Rs 65,000 crore if the initial subscription figures are to be considered.

Figures like these can be numbing because the sheer magnitude makes it difficult to comprehend them, unless there is some way to compare them to known numbers.

Zomato provides what is essentially an order booking and delivery system to restaurants, and in normal times, it would be considered ancillary to the food industry.

In today’s world, however, it is the restaurant industry that has become ancillary to food aggregators like Zomato and Swiggy.

The numbers speak for themselves. The total market capitalization of all the Quick Service Restaurant companies taken together, including Jubilant Foodworks (Dominos, Dunkin Donuts), Westlife (McDonalds), Speciality Restaurants (Mainland China, Oh! Calcutta etc) Burgerking, Barbeque Nation and Cafe Coffee Day, is approximately the same as that of Zomato alone.

If we take established hotel brands, all the listed companies, including behemoths such as Indian Hotels, East India Hotels (Oberoi), Taj etc., the total market capitalization stands at around Rs 44,000 crore.

So why is a 10-year-old company, with huge losses and hardly any fixed assets, seen to have a value greater than even all the established hotel companies with huge assets in terms of property and brand value?

There are three basic reasons for this optimistic outlook.

By providing a common platform where food of any type can be easily ordered, paid for and delivered, it has expanded the market size for restaurant food by increasing the number of people buying food from restaurants for eating at home.

Second, the restaurants listed on its platform increased their own efficiencies as they were able to spread their fixed expenses over a larger number of orders without incurring additional expenditure.

Third, by leveraging the scale of operations and the enormous amounts of data that it collected, Zomato could not only automate its operations and decrease costs, it also was able to drive additional sales through highly targeted messaging to its customers.

So why have they been making losses?

That is where it is necessary to understand their business model. Zomato charges a percentage of the value of every order as a commission. From this, it pays the delivery executive a portion and retains the rest to cover its overhead and other expenses.

What needs to be understood here is that while the delivery cost may possibly be covered completely by the commission, if the value of the order is low, there will be a shortfall in covering the overhead and other expenses. This is the reason for the losses. The increase in the average order value is also why the loss for FY 2020-21, when COVID lockdowns prompted users to order larger quantities, has decreased.

The start-up ecosystem has created an economic model where value has shifted from current profitability to possible future value. The price of a share of a new economy company is not dependent on its net profits and the dividend shared with its shareholders, but upon the increase in its valuation in the next fund raise, giving existing investors an exit with decent capital gains.

The danger with this system is that it can easily become a ponzi scheme with existing investors pumping in funds to raise valuations to stratospheric heights and exiting through IPO’s where shares are picked up by large numbers of retail investors naively hoping to make a quick buck.

Unfortunately, it appears the current regulatory bodies have absolutely no know-how or ability to detect such occurrences and prevent small shareholders from losing their money. Which is probably why the next big IPO on the horizon – Paytm – is expected to be another huge, success despite having declared in its draft red herring prospectus that it has made a net loss for the past three years (Rs 2,942 crore, Rs 2,943 crore and Rs 1,704 crore, in FY19, FY20 and FY21 respectively) and expects this to continue for the foreseeable future. And that its existing shareholders will also be selling at least a portion of the shares they hold.