Paris: Odisha has achieved another milestone in disaster management. Venkatraipur in Ganjam and Noliasahi in Jagatsinghpur have been recognised by UNESCO-IOC as Tsunami-Ready Communities.

With this recognition, India becomes the first country to implement Tsunami Ready in the Indian Ocean Region and Odisha, the first state to achieve this feat.

To confer the UNESCO-IOC’s Certificate of Recognition and Certificate of Appreciation to Venkatraipur and Noliasahi communities, OSDMA Officials, a virtual event is being organised jointly by the Indian National Centre for Ocean Information Services (INCOIS), ICG/IOTWMS Secretariat and Indian Ocean Tsunami Information Center (IOTIC) of UNESCO-IOC on August 7. 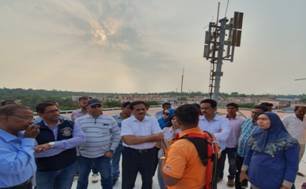 Odisha has emerged as a role model in disaster preparedness with decades of positive intervention by the government, civil society groups, and NGOs. The state has won praise from numerous national and international organisations, including the United Nations, for its deft handling of cyclones Phailin and Fani.

Odisha State Disaster Management Authority (OSDMA) won the IT Excellence Award, 2019, for its innovative conception by using information technology in the field of disaster management.

There’s No Guarantee Any COVID Vaccine Will Actually Work, Says WHO Chief

OHRC Pulls Up Hospitals In Bhubaneswar For Denying Treatment…

BDA To Install Uniform Signages At Heritage Zones In…