Bhubaneswar: Four police personnel from Odisha have found place in the list of the personnel for Union Home Minister’s Medal for Excellence in Investigation for 2020.

According to a Home Ministry release, 121 police personnel from across the country have been awarded the Union Home Ministry’s “Medal for Excellence in Investigation” for 2020.

While 15 awardees are from the Central Bureau of Investigation (CBI), 10 each are from Madhya Pradesh and Maharashtra Police, eight from Uttar Pradesh Police, seven each from Kerala and West Bengal Police and 4 from Odisha Police. The list also includes 21 women police officers. 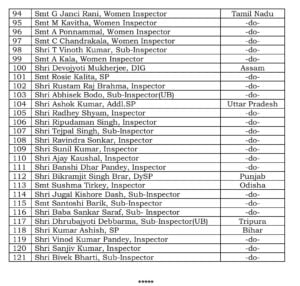 The medal was constituted with an aim to promote professional standards of investigation of crime and recognise excellence in investigation by officers in 2018.

Karan Johar Terms ‘Drugs At His Party’ Campaign As Malicious; Read His…