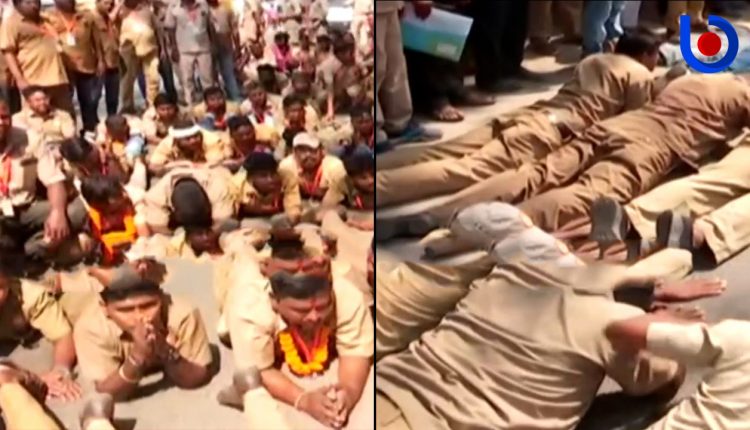 Bhubaneswar: Drivers from different parts of Odisha have launched a unique protest by prostrating on the road with folded hands while proceeding towards Bhubaneswar for a rally to demand insurance coverage, old age pension and other social security benefits.

Having kick-started their journey from Maa Samaleswari temple in Sambalpur, a large number of drivers have touched several places and already crossed Dhenkanal town with a plan to reach Naveen Niwas, the residence of Chief Minister Naveen Patnaik in the state capital.

Stating that the protest has been launched under the banner of Odisha Drivers’ Association, the participants said they have been approaching the state government with an 11-point charter of demands, but there has been no outcome despite assurances from the authorities.

They had also staged a demonstration in the capital city last year demanding compensation from the government for the loss they suffered during the pandemic, but there has been response.

Leaders of the Association said their main demands include insurance coverage of Rs 10 lakh in case of accident and Rs 20 lakh on death, eight-hour duty, recognition as employees of the State Transport Department.

The drivers claimed that they had submitted a memorandum to the chief minister regarding their charter of demands, but no steps have been taken so far.

Besides, they are rendered jobless as the driving licence is not issued to them after attaining a particular age and hence the government should provide pension, they added.

Stating that the drivers in all 30 districts have been protesting to press their demands for a long time, they threatened to intensify the agitation if no step is taken in this regard.