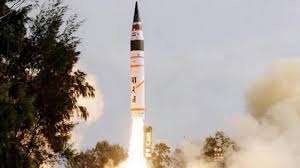 Balasore: India on Wednesday successfully test-fired its indigenously developed nuclear capable Prithvi-II surface-to-surface missile with a strike range of 350 km from the integrated test range (ITR), Chandipur off the Odisha coast about 15 km from here, as part of a user trial by the Indian Army.

The surface-to-surface short-range missile was test-fired at around 11.37 AM from a mobile launcher in salvo mode from launch complex-3 of the Integrated Test Range (ITR). The missile covered around 340 kms within 7 to 10 minutes and met all parameters, said Defence sources.

The launch of this sophisticated missile was a complete success. The mission achieved all parameters met during the trial. It was planned for test between10 AM and 11 AM. But due to some technical problems it was held up for two times, sources added.

The launch activities were carried out by the specially formed Strategic Force Command (SFC) and monitored by scientists of Defence Research and Development Organisation (DRDO) as part of training exercise,” the DRDO scientist added.

“The missile trajectory was tracked by DRDO radars, electro-optical tracking systems and telemetry stations located at Wheeler Island and along the coast of Odisha,” he added.

Prithvi-II has been designed to operate with both liquid and solid fuel and is capable of carrying both conventional and nuclear payloads up to 500 kg.

Valentine Week: All You Want To Know About Rose Day

Another Night Trial Of Prithvi II Off Odisha Coast…