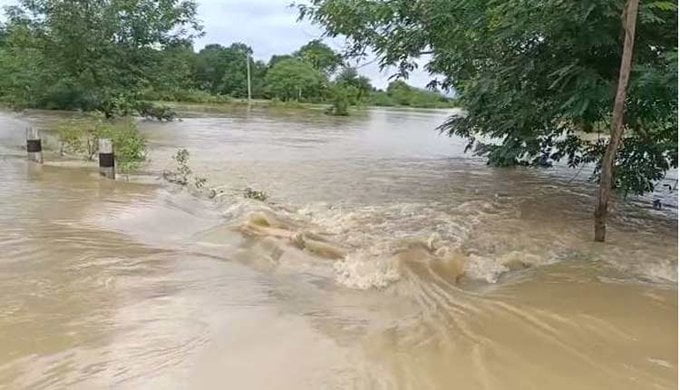 Jajpur: Vast areas of agriculture field in Odisha’s Jajpur district have been flooded after river Baitarani breached its embankments in some places on Monday.

Kantapada in Dasrathpur is the worst affected in the district. As the breach caused by the last year’s flood in Baitarani was not repaired this year, the water from the river flooded vast areas of agriculture field in Kantapada.

Speaking to media persons on the flood situation, district collector Chakrabarti Singh Rathor said the water level at Anandpur barrage, which had gone up, has stabilised and the rising trend at Akhuapad has almost stopped.

“The situation in Dasarathpur is a bit worrisome. We have already started marking the danger points and officials have been deputed areawise to take up the task of controlling the breaches,” he said.

On breaches in the river, the collector said most of the breaches had been repaired before the onset of monsoon. Only some huge breaches on the embankment that needed strengthening could not be taken up. But overall situation is under control as no major loss has been reported from anywhere. The officers are constantly monitoring the situation.

“Since the rising trend of Baitarani has been stabilised, we don’t think evacuation of people would be necessary. However, multipurpose shelters at block level have been readied in case of emergency and all measures have been taken to prevent any kind of loss,” he added.