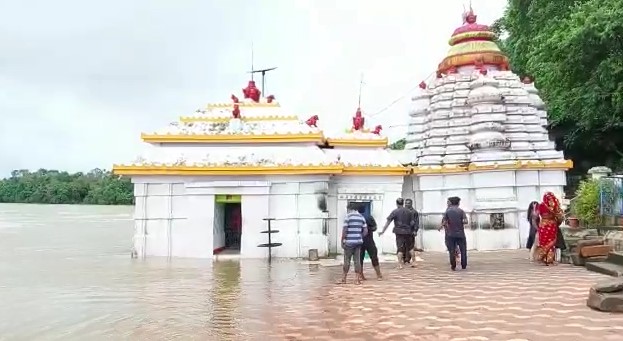 Cuttack: Prohibitory orders under Section 144 have been imposed at Maa Bhattarika temple, which has been submerged by floodwaters in Odisha’s Cuttack, by Additional Tehsildar Tapan Kumar Parida.

According to sources, the prohibitory orders were imposed after locals gathered to witness floodwaters in the sanctum sanctorum of the temple. People have been restricted from entering the temple premises due to high water currents.

Local MLA Debi Mishra visited the shrine on Sunday to take stock of the flood situation. The BJD legislator went around the flooded premises of the temple, located on the banks of Mahanadi river at Sasanga village in his Badamba constituency, and interacted with its servitors and locals.

Speaking to media persons after the visit, the MLA said though the temple is almost half-submerged, the deity is safe. In case of more inflow of water, the idol would be shifted to a safe place, he added.

“We are anticipating a medium-level flood in the Mahanadi. Around 10.5L cusecs water is expected to pass through Mundali. Collectors are on alert to deal with a possible flood situation. Wherever there is a threat, people will be relocated to safer places,” said Odisha Chief Secy Suresh Mahapatra.