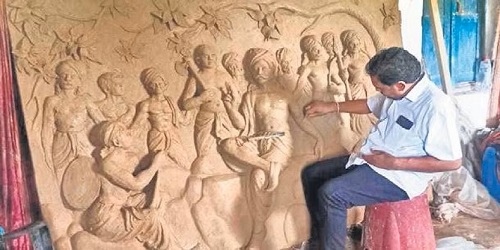 Sambalpur: The Hirakud Wildlife Division is planning to build a Veer Surendra Sai Memorial at Barabakhara near the Debrigarh Wildlife Sanctuary in Odisha’s Sambalpur district to spread awareness about the freedom fighter’s fight against the Britishers in the region.

During the period 1830s to 1860s, Veer Surendra Sai and his followers were taking refuge at various places during the freedom struggle. Barabakhara offered them a safe haven, where they held meetings and planned battle strategies against the Britishers.

The revolutionaries also constructed a chain of hill forts with stone and mud on Debrigarh hills, with roads connecting Sambalpur with Raipur, Ranchi and Cuttack. The forts were constructed in and around Debrigarh Sanctuary and the Barapahada hill range stretching from Western Odisha along Hirakud Reservoir up to Singhoda in Chhattisgarh.

“Because of the historic association of Surendra Sai with Debrigarh, the inhabitants around Barabakhara have a unique devotion towards him even today. To encourage them further to conserve the forest and wildlife and to make people aware of Sai’s contribution, we have come up with the memorial,” Divisional Forest Officer (DFO), Hirakud Wildlife Division, Anshu Pragyan Das told TNIE.