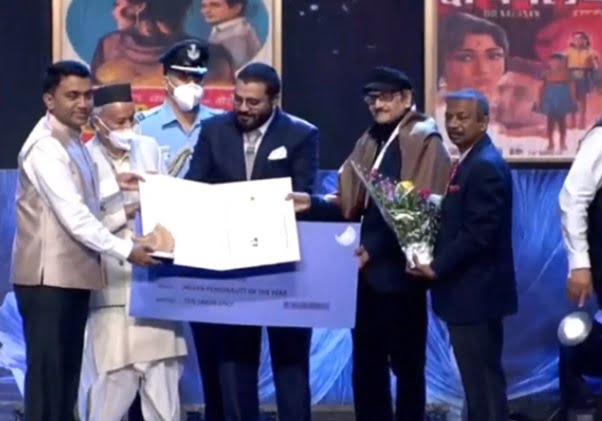 Margao: Veteran film personality Biswajit Chatterjee was presented the Indian Personality of the Year Award at the 51st International Film Festival of India, which concluded at Goa on Sunday.

An actor, producer, director and singer who worked in Hindi and Bengali films, the 84-year-old Biswajit recalled and expressed his indebtedness to singer-producer Hemanta Kumar Mukherjee for bringing him to Mumbai from Bangladesh.

“I thank the Government of India and the Ministry of Information and Broadcasting from the bottom of my heart, for honouring me this with award. This year, we came to know that Bangladesh is our focus country, a country with which I have a deep connection. When Bangladesh was being attacked, genius director Ritwik Gatak was with me in Mumbai and we used to get inspired by the speeches of Bangabandhu Sheikh Mujibur Rahman. Then as per Ritwik da’s suggestion, we made the documentary ‘There flows Padma, the mother river’… I later went to Dhaka and presented it to Bangabandhu. I can never forget the love I got from Bangladesh. Bangladesh and India are one, we are brethren; we are not separate,” said Biswajit.

“As an artist, as an actor, I wanted to become someone. I wanted to become an all India actor, not just an actor known in West Bengal. If someone is confident from within his heart that he or she will be able to achieve something, keep up the faith in oneself and does not deviate from the chosen track, he or she will definitely attain the achievement. When you get a role, perform the role as if you are the best person to have been chosen for the role. The quest of an artist does not end till the very ending,” he said.

182 Patients Recover From COVID-19 In Odisha

IFFI Will Be Organised In A ‘Hybrid Manner: Prakash…

IFFI’s Endeavour Is To Get Film Makers To Land Of…