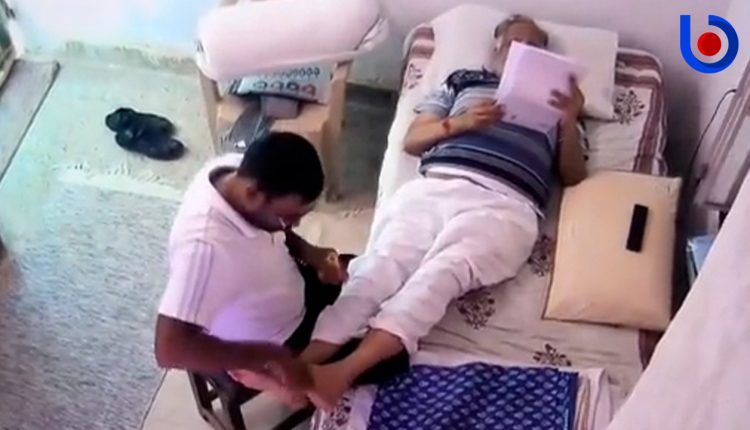 New Delhi Purported videos of Aam Aadmi Party (AAP) leader Satyendar Jain lying on a bed and getting a massage inside the high-security Tihar Jail in New Delhi have gone viral on social media.

58-year-old Jain, who is in judicial custody over money laundering charges, can be seen reading some documents and a man in a white T-shirt massaging his legs in the video.

While the viral video triggered a row in political circles, there was no reaction from the Tihar jail administration on the matter so far.

Soon after the videos went viral on internet, BJP leaders on Saturday lashed out at the AAP government in the national capital and alleged that Jain was being accorded special treatment in the high-security jail.

The Delhi Prisons department comes under the AAP-led Delhi government.

Delhi Deputy Chief Minister Manish Sisodia hit back at the BJP over the saffron party’s attack on imprisoned Delhi minister Jain after the video of him getting a ‘massage’ went viral.

Responding to the BJP, Sisodia accused the saffron party of stooping to a new low and of indulging in dirty politics. Commenting on the viral video, Sisodia said Jain was undergoing physiotherapy, which could not be labelled as VVIP treatment.

Earlier this week, a Tihar jail superintendent was suspended for alleged involvement in providing special treatment to Jain in the prison.

According to reports, the Enforcement Directorate (ED) had earlier claimed in a court in Delhi that Jain was getting special treatment inside the Tihar Jail.

The AAP had dismissed the allegations as “absurd and baseless”.

The ED had arrested Jain and two others on May 30 in the money laundering case based on a CBI FIR in 2017 under the Prevention of Corruption Act. The AAP minister has been accused of having laundered money through four companies allegedly linked to him.