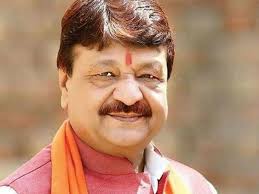 Vijayvargiya called the incident “unfortunate” and told ANI: “I think there was mishandling from both the sides. Kachhe khiladi hain —Akashji bhi aur nagar nigam commissioner (both Akash and the civic official are novices). It wasn’t a big issue, but it was made huge.”

Vijayvargiya was speaking a day after his son Akash was released on bail. The Indore-3 MLA was arrested for allegedly assaulting municipal official Dhirendra Singh Bais with a cricket bat while opposing the demolition of a dilapidated building.

“I think officers should not be arrogant, they should talk to people’s representatives. I saw a lack of it and to ensure that it doesn’t happen again, both of them should be made to understand,” the BJP general secretary said.

A civic official on Sunday told PTI they were preparing to demolish the dilapidated house, which was declared dangerous, ahead of the rainy season.

After coming out of jail, Akash seemed unapologetic about what he did. “I am not guilty or embarrassed about what I did as it was in public interest… I will keep working for the betterment of the region and the public.” Hindustan Times later quoted him as saying: “I will keep in mind that I don’t have to take a bat in my hands again for such an act. I will follow Mahatma Gandhi’s path of non-violence.”

Akash received a grand welcome from family and supporters as he walked out of prison. Kailash Vijayvargiya, too, was present outside the jail.