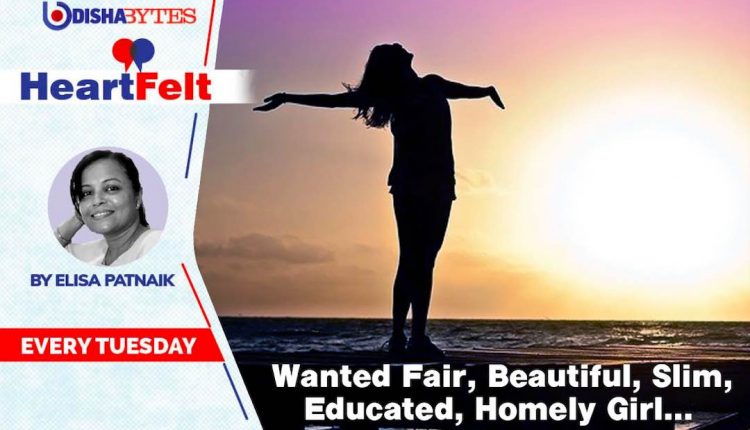 A distant cousin of marriageable age on the lookout for an ideal match kept on ‘rejecting’ one marriage proposal after another. His mother, my aunt, who was both baffled and hassled at his son’s actions requested me to speak to him to understand his thoughts. But upon speaking to him, I was flabbergasted hearing the laundry list of criteria churned out for the future wife – smart and homely, beautiful, and humble, able to adjust in a joint family and also groove at a discotheque, highly educated with a good job but not proud, able to hold a conversation with a glass of wine and also adept at creating rangolis during festivals, a good cook and hostess…

“Do you realise, a woman too has every right to have similar expectations from you,” I responded, to which he replied, “but I am a guy and obviously have an upper hand in choosing a girl the way I want.” Understandably, I was incensed at his sexist and ridiculous views though I managed to blurt out, “Are you sure girls like these exist? And if so, why would they choose a regressive man like you?!”

With changing times and the emancipation of girls and women, one would expect a change in mindset in setting expectations for prospective brides in arranged marriages – still the preferred and prevalent mode for getting married in India today. Unfortunately, however, nothing much has altered, rather an impossibly long list of so-called qualifications have been added to the existing list for brides-to-be, including some absurd ones.

Matchmaking through matrimonial advertisements and family and community networks still reeks of patriarchy, sexism and even misogyny and racism.

Matchmakers, matrimonial agencies, sites, and sections continue to perpetuate gender stereotypes and legitimise gender roles and standards defined by patriarchy, that women struggle to deal with every day. Gender discrimination cuts across categories and seems almost like a typical mail-order bride catalogue.

A look at the ‘Brides Wanted’ section of matrimonial advertisements shows how obsessed grooms-to-be and their families are with a set physical appearance for women. Fair, beautiful, attractive, tall, slim, charming are attributes sought in the prospective brides while it’s hardly mentioned as a criterion for the grooms. It’s as if the complexion, weight, and height assume supreme importance overshadowing all other skills, talents, achievements, and personality traits.

One of my cousin sisters was furious and humiliated hearing this outright offensive remark from a prospective groom, “you looked beautiful and fairer in your photographs but not in reality!” Even now, a woman’s identity in the matrimonial market is determined by beauty standards established through patriarchy – tall, fair, beautiful, and feminine.

And the other must-attributes for girls include – cooking, homely, cultured, decent, simple, being able to adjust in a joint family, of good character etc. Men and their families even go to the extent of judging these traits and finalising their decision based on one or two meetings.

I always wonder and feel disappointed too thinking of parents and families of girls who continue with these regressive portrayals, undermining their daughters’ potentials and qualifications, and do not hesitate to highlight the same attributes in matrimonial profiles. Even some young, educated, and modern women do not find anything amiss in such portrayals. Biodata of potential brides always mention them being either ‘fair’ or ‘wheatish.’ And if the girl is indeed dark-complexioned, she is compelled to present herself in the accompanying photographs as fair with enhanced lighting or a layer of foundation cream on her face.

No matter what the qualifications, skills and talents of women are, the pre-requisites of being a good cook and homemaker still hold primary to be accepted as a “good wife.” Do men and families want to get married to obtain a good cook and house help to manage the house? This attitude not only undermines the potential and other talents of women but also reinforces the norm that women are supposed to be obligatory cooks in the family.

Strangely, phrases like “educated but non-working bride”, “working but humble” are other contradictory and absurd expressions commonly cited denoting the expectations of a modest, servile wife who would essentially take on the domestic role and not pursue her dreams and ambitions. Some families in this age and times consider their girl’s education as security for marriageability as their degrees will allow them to be married into prosperous families. And women married to these families are usually discouraged from working.

Even today, Indian society and families are apprehensive of highly educated and empowered brides and wives, certain that their liberated thoughts, lifestyle, agency, and freedom will hamper family peace and domestic harmony. I’ve heard many relatives and acquaintances quip, “she is too smart and liberated for our family,” aiming at successful and ambitious women.

Ideal spousal expectations are replete with gender stereotypes. A man’s financial stability and ability to protect exchanged for a woman’s conventional physical beauty and domestic prowess. Women who don’t fit into these stereotypes are not considered to be “marriage material.” And going by the matrimonial profiles, it seems the roles for men and women are clearly defined – men as breadwinners and women as caretakers of the house and family – even though the reality is changing with more and more women contributing to household income and men taking up domestic responsibilities.

The ‘pristine’ character of the would-be brides is another distinct benchmark. The ‘good’ character or ‘cultured’ connotes a woman who doesn’t smoke, drink, is a non-feminist, is submissive, docile, and not outspoken. In short, a woman who would easily agree to and follow what is expected of her unquestioningly.

For single women – widows, divorces – it’s even tougher as they are still considered to be at the lowest rung of the marriage market. Regressive matrimonial ads continue to discriminate against them with few men/families mentioning that widows and divorcees need not respond to their profiles.

Most of the matrimonial agencies are perfectly happy perpetuating the stereotypes through advertisements and profiles, hardly acknowledging the shifting progressive trends. There have been few welcoming exceptions in recent years where advertisements express the rights of women, their choices and compatibility in arranged marriages. For example, Shaadi.com launched a campaign titled ‘My Conditions Apply’, to depict changing approaches that modern women have towards marriage and candidates. Bharat Matrimony’s commercials lately too have been about compatibility, equality, and support in relationships. Women’s wear apparel brand Biba’s advertisement series, “Change the Conversations” were a refreshing and welcoming change challenging the existing norms around matrimony.

Nevertheless, matrimonial profiles and the requirement for ideal matches are a true reflection of deep gender prejudices nurtured within us, our homes, and our families. A good and lasting marriage is much more than a set of specifications based on regressive norms and practices. It’s high time Indian families get over stereotypes about women, teach their sons to cook, clean and look after the family, accept empowered women working, earning, and contributing to household income and get over their fixation of fair, slim, and beautiful brides.

Hopefully, matchmaking will reflect the changing times, choice, freedom, and empowerment of women in choosing suitable life partners without succumbing or adjusting to conventional customs and ideas.

Thankfully girls and young women are showing greater ownership in seeking partners through arranged marriages and are shunning the traditional and sexist approach and description. Their profile lists their natural personalities and focuses more on their qualifications, interests, and aspirations rather than their typical physical attributes. And women do not hesitate to deny proposals which do not suit them, much to the chagrin of conventional men and their families.

A few men too are rewriting their profiles seeking women with natural and genuine traits like a sense of humour, love for travelling or animals etc. Hopefully, with time, expressions like “Wife Material,” “Beauty with Brains” and Fair, Slim and Homely…will stop haunting and pigeon-holing girls and women.