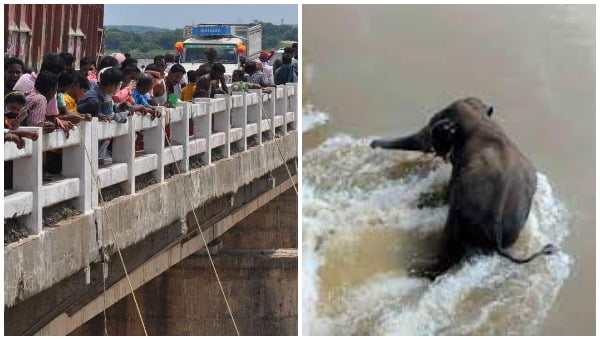 Bhubaneswar: Carcass of an elephant was found stuck at the Jobra barrage in the Mahanadi near Cuttack on Sunday morning. However, the forest department is yet to ascertain whether it is that of the tusker, which struggled to cross the swollen river on Friday and then went missing.

It was last spotted near Dhabaleswar ghat at around 2.30 am on Saturday. Forest officials had failed to trace him despite using drones in the search operation. Two teams were deployed at Jobra anicut to trace the elephant, considering the possibility that if it drowned then the carcass might emerge there.

If sources are to be believed the incident reflected the strong social bond that elephants share. It appears that the tusker was caught in the swirling water while trying to help a calf of its herd cross the flooded river safely.

The carcass of the calf was recovered from near the river banks close to north Dampara, the point from where they cross over, on Saturday.

According to sources, the calf was swept away in the strong currents and the tusker was waiting for it to cross the river. Six elephants of the herd had already crossed the river by then. However, the tusker got stuck as the velocity of the water increased.

There were also reports that two elephants had tried to help the tusker but in vain as the water level where it got stranded was very high.

Incidentally, the sub-adult elephant had moved closer to the shore but turned back due to the presence of a large crowd on Mundali bridge and both sides of the river.

Chandaka DFO Md Jameel had then blamed the crowd for creating problems in the operation and had requested police to disperse them.

Minutes later, a powerboat carrying six ODRAF personnel and two mediapersons capsized in the river, leading to the death of journalist Arindam Das and a rescue team personnel Sitaram Murmu.

Since the entire operation was by the river, the Athagarh DFO had sent a requisition for an ODRAF team to be kept on standby at the spot for exigency purposes.

ADG (Law) R K Sharma is conducting an inquiry into the incident.