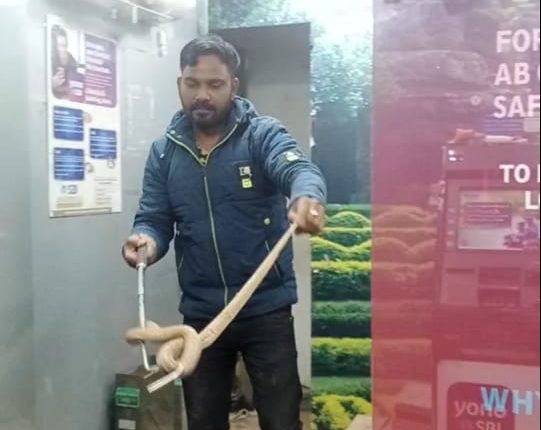 Bhubaneswar: A 4-ft-long deadly cobra was found inside an SBI ATM near Fortune Tower in Odisha’s capital on Tuesday evening.

According to sources, one Rajesh Hansda who was waiting outside the ATM alerted the customer drawing cash inside about the snake. He also informed the snake helpline.

Thereafter, snake helpline volunteer Ashis Behera arrived at the spot and rescued the cobra. The snake was later released into suitable natural habitat on the Bhubaneswar outskirts.

“We have earlier rescued snakes from ATMs. The customer Rajesh Hansda waited outside the ATM to alert customers till we reached the spot. His effort could prevent an untoward incident,” General Secretary of Snake Helpline Subhendu Mallik told the media.