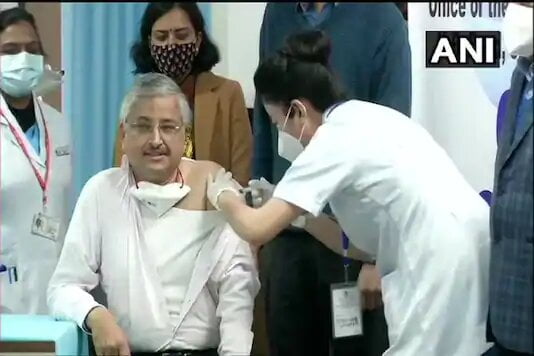 New Delhi: AIIMS Director Dr Randeep Guleria became one of the first Indians to get vaccinated against COVID-19 on Saturday morning. The move was aimed at inspiring confidence among the public about the safety and efficacy of the vaccines being rollout out in the country.

Dr Guleria received his shot on live television soon after sanitation worker Manish Kumar became the first to be administered the vaccine in the country at AIIMS in Delhi, in the presence of health minister Dr Harsh Vardhan, ANI reported

Vinod K Paul, who heads a government panel on vaccine strategy, was also administered the vaccine on live television after Dr Guleria. They joined the first wave of senior professionals in the medical field to be vaccinated in a campaign to assure people that it is safe, and boost the morale of frontline workers who will be the first to get the jabs, the report added.

They took the vaccines soon after Prime Minister Narendra Modi told Indians in a televised address that Indian should not worry about the two approved vaccines in India as approvals were given after experts were satisfied with data. “So stay away from rumours,” he said.