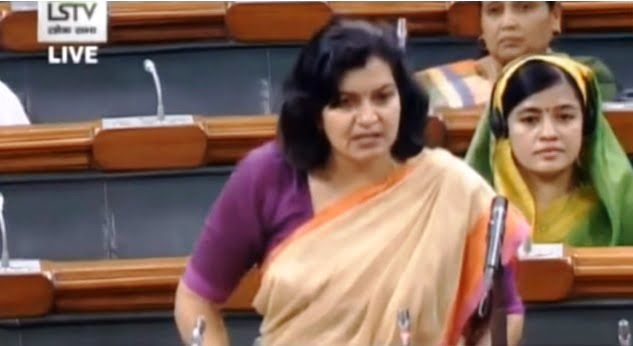 She said it is a reflection of an extraordinary balance between intent and content, vision and provision.

Quoting French poet Victor Hugo, the BJP MP and former bureaucrat from Odisha said  ‘No force on earth can stop an idea whose time has come’ and so the time for crystallization of Prime Minister Narendra Modi’s idea of ‘New India’ has come.

“This particular budget provides the building blocks for ‘New India’. This is a highly-aspirational budget as we are talking of $5 trillion economy, which will be achieved by 2024, and this particular aspiration is an affirmation of PM’s slogan, ‘reform, perform and transform’,” she said.

Aparajita said that there is a declaration of Rs 100 lakh-crore for infrastructure development by 2024. “The budget speech also talks of formation of an expert committee to look into ways and means of resource mobilisation, which is definitely a very good step in the right direction,” she added.

Taking a potshot at Congress MP Shashi Tharoor for his ‘Suit Boot Ki Sarkar’ jibe, she said this budget focuses on ‘gaon, gharib and kisan’.

“I had been to a village in my constituency the day before and a villager said we are getting five things from the Centre – toilet, cooking gas facility, roof over our head and piped water supply by 2024, what more do we need,”

Then shifting to Odia, she said that the villagers had asked her to express their gratitude to the PM for these facilities.

She said the steps are path-breaking and reflection of government’s foresight as it is talking of water conservation and management, using plastic waste for road construction under PMGSY, promoting research and innovation, recapitalisation of banks to ensure credit flow and going one step ahead of the national rural livelihood mission by allowing an overdraft of ₹5,000 to every verified woman SHG member.

“I have worked in the rural development department for five years and handled MNREGA, we are talking about water conservation. Per drop more crop was the PM’s idea, we have graduated to the next level now. We are consolidating all the departments working in the  ivory tower in isolation and talking of Jal Shakti Mantralaya,” she said.

She said the assurance to provide piped water supply to all rural households by 2024 reflects courage of the conviction, “It is very difficult since were are talking of 7 lakh villages, which is 69% of country’s population,” she said.

Aparajita said that the members should disapprove of cynicism as a national disease of India, “We should not be cynic or pessimist. Here, I am reminded of Helen Keller saying, ‘No pessimist ever discovered the secret of the stars, or sailed to an uncharted land, or opened a new doorway for the human spirit’. Therefore, let us rise to commend and say that this is a wonderful budget,” she said.

The BJP MP said the budget is an example of what the sum would look like when all the smaller parts that actually work are added up. “We are not talking of vast schemes and grandeur theories, as these will not achieve the same benefits as that by actualisation of small sustainable and attainable goals. This particular budget is not a collection of numbers as my friends in the opposite bench have been asking for, it is an expression of values and aspirations of our government and people of our country,” she said, adding that it covered farmers, vendors, the youth, women and all vulnerable sections of the society.

“We are talking of targets and monitoring them. This is not a standalone budget, there is sustainability and continuity in it.”

Aparajita ended her speech saying that she hoped that good sense will prevail and the BJD government in Odisha will decide to be part of the National Nutrition Mission and adopt Ayushman Bharat.

Hunt On For Lady Don Of Stone Mafia In Odisha

World Cup: Why Is Skipper Kohli Having A Déjà Vu Ahead Of Semi-Final Today!