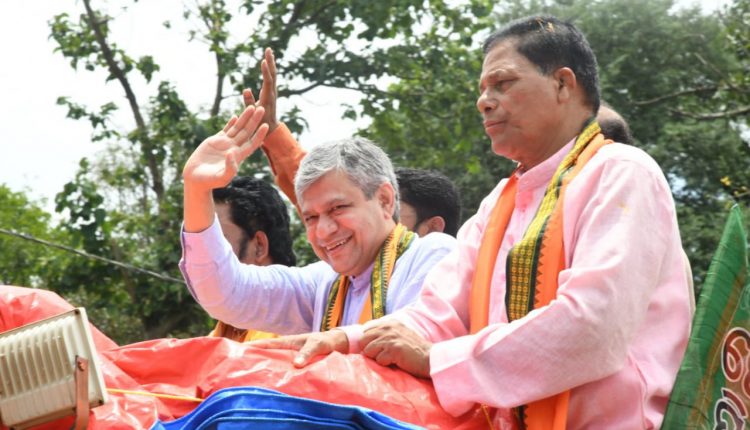 Jeypore: Railway Minister Ashwini Vaishnaw, which is on a four-day tour to Odisha, reviewed Jeypore-Malkangiri, Jeypore-Nawarangpur and Theruvali-Gunupur railway projects on Saturday.

The Union Minister tweeted that he began the third day in the state with the review meeting and stressed expediting the projects. He also discussed new prospects for the area.

Vaishnaw then resumed his Jan Ashirwad Yatra by visiting the Sabar Srikhetra and seeking the blessings of Lord Jagannath. On his way, he met President Awardee Uma Kant Das, a retired teacher.

En route Nabarangpur, he was greeted by BJP activists at Ambaguda, Borigumma and Auli.

On Friday, the Railway Minister had tweeted a video of his having tea at a roadside stall in Koraput. “I enjoyed the tea and made digital payment it,” he wrote.

Vaishnaw has been updating about his visit to Odisha – from boarding the flight in New Delhi to arriving in Bhubaneswar and the train journey to Rayagada– on his official Twitter handle. And all the tweets are in Odia.

On arriving in Bhubaneswar, he had tweeted that Odisha is his ‘Karmabhoomi’.

This, along with his taking oath in Odia at the Upper House in 2019 and invoking Jagannath after being sworn in as a Cabinet minister, is being viewed as a bid to show his commitment to Odisha of which he is not a native.

After Rayagada, Jeypore and Nabrangpur, Vaishnaw is scheduled to visit Bhawanipatna on Sunday and again board a train from Balangir and arrive in Bhubaneswar the same day.

Bollywood Actors Whose Roots Can Be Traced To Afghanistan