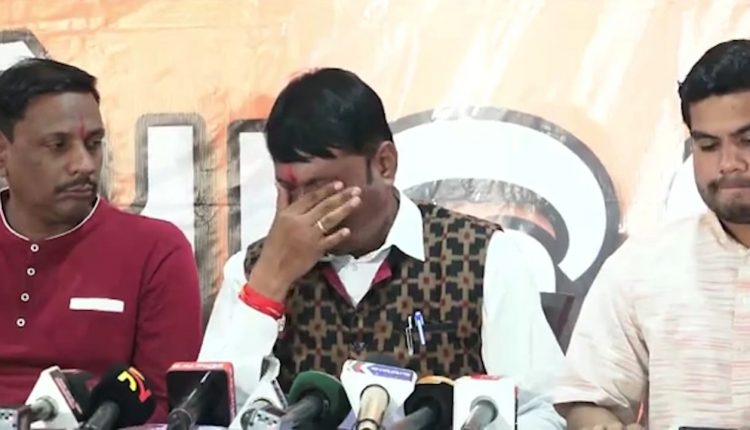 Padampur: Amid hectic campaigning for Padampur bypoll in Odisha, senior BJP leader and party candidate for the Assembly seat, Pradip Purohit on Wednesday accused ruling BJD activists of mounting an attack during his meeting at a village.

Addressing a press meet at Padampur, the former MLA alleged that he was attending a meeting at a village on Tuesday night when some BJD ‘goons’ launched an attack.

A visibly shaken Purohit, who broke down while narrating the alleged incident, claimed that around ten persons stormed the meeting venue, snatched the mike and damaged the tent erected at the site.

“The miscreants beat up some BJP workers present at the meeting and also attempted to attack me. However, the villagers saved me and prevented the goons from attacking me. I cannot understand as to why they attacked us,” the BJP leader alleged.

Claiming that some BJP workers sustained injuries in the attack, Purohit accused the BJD of having engineered the attack. Some BJD leaders, including Ministers, are behind the incident and they have announced money for those who attack BJP leaders and workers in the run up to the by-election, he alleged.

Seeking protecton from the police, the BJP leader saidi the police should not act as a tool in the hands of the ruling BJD but must function in an impartial manner.

Stating that every body has a right to support a political party of his or her choice, Purohit said the ruling party should refrain from targeting its opponents and ensure free and fair poll.

‘Today He Tried To Kill Me Cut Me In Pieces And Throw Me Away’: Shraddha’s Complaint Letter Of 2020 Against Aaftab