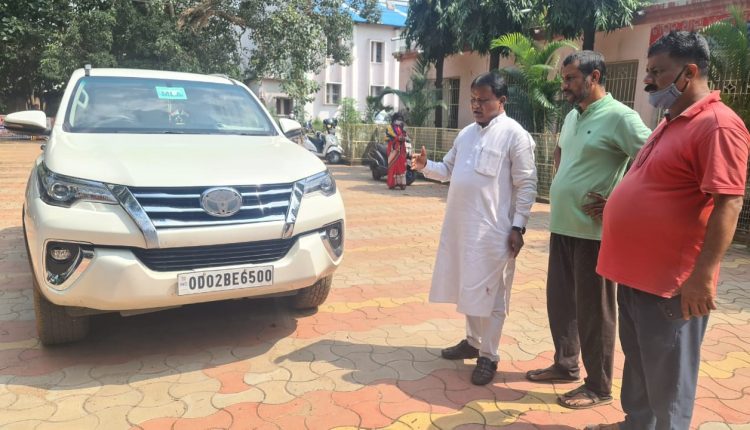 Keonjhar: BJP MLA of Keonjhar Sadar Mohan Charan Majhi had a close shave in a bomb attack on Sunday.

Majhi told the media that two bike-born youths hurled two country-made bombs at his vehicle near Mandua under Town Police limits while returning from a public meeting.

“I had gone to the office of the Utkal Sambad of the Siksha Vikash Samiti near Mandua to attend the executive meeting of the Bharatiya Mazdoor Sangh. After attending the meeting, I was on the way to my house at Mandua when two youths intercepted my vehicle. One of them in a black shirt got off the bike and hurled two bombs at my vehicle. He also tried to take out a pistol but was chased away by my PSO. They then fled towards the railway station,” he said.

The incident took place around 12.55 pm.

Although the front panel of the vehicle was partially damaged in the attack, Majhi and his driver sustained no injuries.

The MLA further said that local BJD leader Raja Chakra, while addressing a party meeting in the Sadar Block three weeks ago, had issued a threat to him. “I suspect that his supporters might have tried to kill me,” he pointed out.

He has lodged a complaint with Keonjhar Town police and two special teams have been formed to nab the two criminals, sources said.

Demanding immediate arrest of the two youths, the BJP activists said that the road blockade will continue till the police assure them of taking action and provide adequate security to their leader.

Terming the allegations of his involvement in the attack on Majhi as false and baseless, Chakra demanded a thorough investigation into the incident and the immediate arrest of the accused.