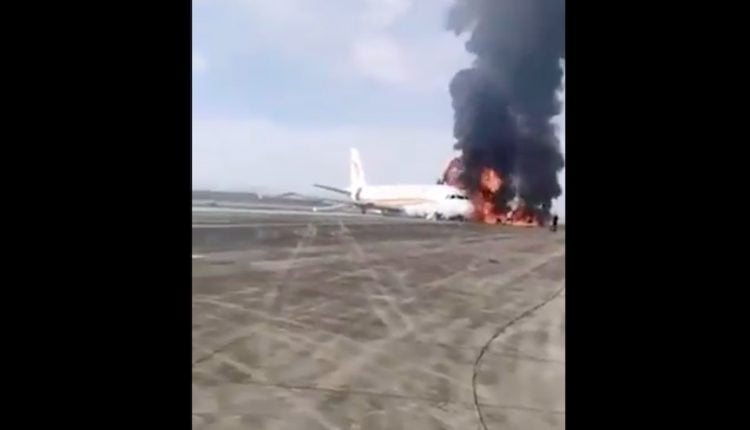 Beijing: A Tibet-bound plane with 122 onboard veered off the runway and caught fire after an aborted takeoff in China’s southwestern city of Chongqing on Thursday morning, state-run Xinhua news agency reported.

“Tibet Airlines flight 9833, an Airbus A319-115, was damaged beyond repair when it was involved in a takeoff accident at Chongqing-Jiangbei International Airport (CKG/ZUCK), China. Preliminary information indicates the aircraft aborted the takeoff and veered off the runway. A post-crash fire ensued, but all occupants were able to exit the aircraft,” noted Aviation Safety Network.

Video footage shows flames and black smoke billowing from the fuselage of the plane:

A plane veered off the runway during take-off and caught fire at an airport in SW China’s Chongqing on Thursday morning. 113 passengers and 9 crew members have been evacuated safely and some people slightly injured have been sent to hospital, said the Tibet Airlines. pic.twitter.com/FUZX3MSnfA

Tibet Airlines, in a statement, said that all passengers and crew have been safely evacuated and the injured passengers were all only lightly injured, and have been sent to hospital for treatment. Some reports suggested that 40 people have been hospitalised.

Notably, 132 people on board, including nine crew members, were killed after a Boeing 737 aircraft crashed in Tengxian county of the Guangxi Zhuang autonomous region on March 12.

What Is Tomato Flu? Is The Flu Infecting Children Below 5 Years Contagious? Know The Precautions