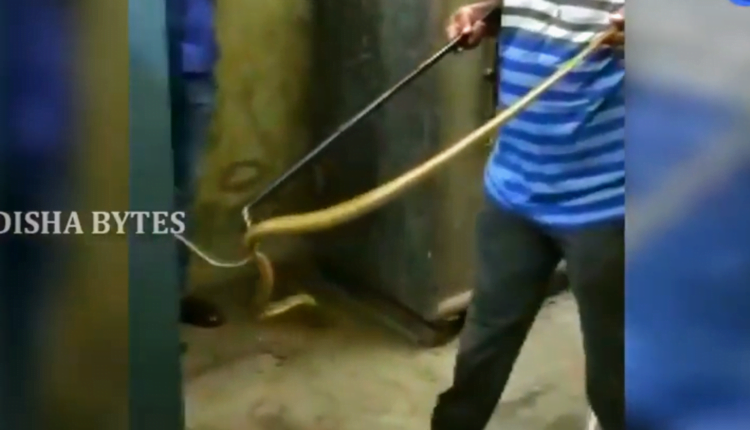 Bhubaneswar: Banking operations came to a standstill at a State Bank of India branch in the city after a four-foot-long cobra was found inside the strong room on Friday.

The incident happened at the SBI’s IMMT (Institute of Mineral & Material Technology) branch.

According to bank insiders, staffers spotted the yellow-coloured spectacled cobra when they opened the strong room for getting cash for the day.

Since banking activities was not possible without cash, customers had to wait while the bank called Snake Helpline.

Subhendu Mallik, founder of Snake Helpline, reached the spot within 15 minutes, but couldn’t locate the snake at first. After 10 minutes of searching, the cobra was located underneath the iron chest where cash was kept.

Then the job was to take the cobra out to open. A bank employee teased the snake with a long plastic pipe. After some minutes, the cobra came out and rescued by Subhendu. The total rescue operation took about 20 minutes.

Subhendu said, “SBI is the number one bank of the country and I rescued a cobra from its strong room, which is normally out of bounds for public. It was a thrilling experience.”